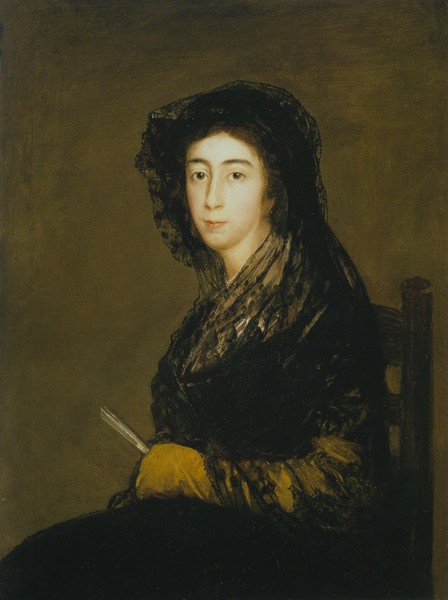 This work belonged to the collection of Don José Costa and Doña Amalia Bonells de Costa. It was inherited by the couple's son, José de Costa y Bonells, and Doña Antonia Bayo de Costa. It later came into the possession, also by inheritance, of Doña Matilde Quesada y Bayo, the last Countess of Gondomar. After that it was in a number of different collections: the Fine Arts Company, Lucerne; the collection of Count Bedel Jesleberg, Oslo; and the Tietjen collection, New York. It was finally bought by the museum where it remains to this day in 1941.

According to Xavier de Salas, the lady depicted in this portrait is Amalia Bonells de Costa, daughter of the Duchess of Alba's doctor, Jaime Bonells, and mother of Pepito Costa y Bonells, whom Goya painted when he was a child.

X-rays made of this painting have revealed that underneath the figure of the lady another portrait is hidden, that of a woman with a mantilla adorned with a flower. It has been suggested that it is the same woman, painted several years earlier, and that she had commissioned Goya to redo her portrait with a black mantilla, as a sign of mourning for the death of her father in 1813.

She is shown seated on a chair, in front of a neutral background. She wears a black dress and a black lace mantilla that falls down over her shoulders, covering her neckline. Her arms and hands are covered by yellow gloves that are almost the same tone as the background. In her hands she holds a closed fan.

Her pale, serious face is looking out at the viewer.

We can see a large difference between the carefully finished brushstrokes of her face, which give her a porcelain-like appearance, and the fast, looser ones employed on the mantilla and the gloves.