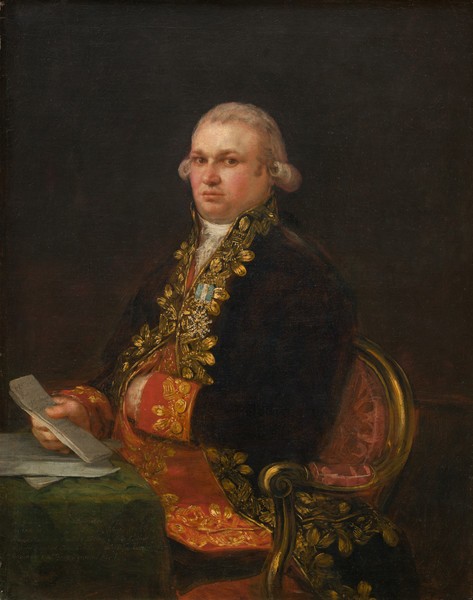 his work was the property of Antonio Noriega himself. It was later acquired by Freiherr Ferdinand Eduard von Stumm, the German ambassador, before belonging to Wildenstein & Co., of Paris and New York. In 1955 it came to be in the possession of the Samuel H. Kress Foundation, New York. It was finally donated to the National Gallery of Art, Washington, in 1961.

Antonio Noriega de Bada (Castañera, Asturias, 1769-Badajoz, 1808) reached the position of high treasurer and parliamentary representative for the principality of Asturias, a post awarded to him in 1797. On 23 July 1801 he was awarded the honour of the Order of Charles III, which is the probably why this painting was commissioned. Goya also painted the sitter's wife, Francisca Vicente Chollet y Caballero, in 1806.

The subject is shown seated in an armchair in front of a table. He is wearing an elegant uniform with golden needlework that stands out against the red of his unbuttoned vest in which he conceals his left hand. In his right hand he is holding a piece of paper with his name and Goya's signature. On his chest he bears the medal of the Order of Charles III. The heavily-built sitter stares out at the viewer with a certain air of arrogance and gives the impression of not feeling entirely at ease as he poses for the painter. According to Gudrun Maurer the hard features and the obstinately pursed lips reveal a doctrinaire character, mixed, however, with a strange sadness and anxiety, which shows through from deep inside this bold character.