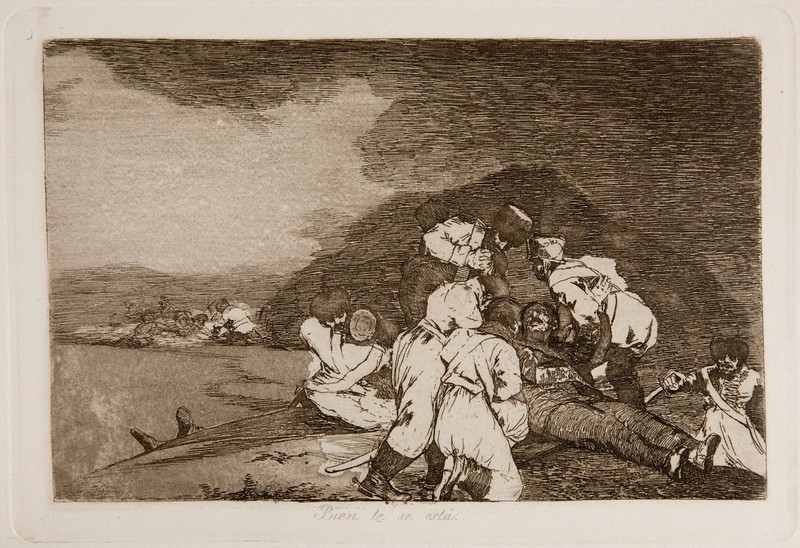 According to Tomás Harris, there exist several state proofs of this work. The first, made before the number was engraved on, contains some retouching in burin to the head of the wounded soldier and on the upper portion of the kneeling soldier. By the time the next state proof was made, the lavis (or open-bite etching) had been added over the entire copperplate. Later on a new state proof was made, now including the engraved number 26.

No preparatory drawing has been conserved.

In a dark landscape, possibly at night, a French commander has fallen in battle. According to some experts, Goya has depicted in this print his interpretation of the fall of General Pierre-Antoine Dupont (Chabanais, 1765-Paris, 1840), who was killed at the battle of Bailén. At that battle, which took place in the early hours of 19 July 1808, the French contingent were defeated by troops under the Spanish general Castaños (Madrid, 1758-Madrid, 1852). This represented a key moment in the Spanish War of Independence since it was the first time that Napoleon's army had been beaten in a pitched battle.

In the lower right-hand corner of the print we see the dying figure, surrounded by a number of his soldiers. The soldier at the top of the group is clasping his hands together as if praying for the life of the French commander.

With this image Goya points to the inevitability of death, an obvious consequence of war, and something that can lie in wait for and surprise anyone, no matter their rank. In this case, the title of the print, It serves you right, is another indication that the artist considered this death to be more justified than many others.

By means of a persistent use of tightly-packed horizontal lines etched into the copperplate, the artist has built up the clouds and the mountains in the background, concentrated around the dying soldier like an ill-fated halo which reveals his hopeless future. The dark tones used in the body and face of the wounded man contrast sharply with the brilliance of the soldiers, dressed in much brighter clothing, that surround him.

According to Enrique Lafuente Ferrari, this print can be related to other scenes featuring people wounded in battle or receiving treatment: no. 20, Treat them, then on to other matters, no. 24, They'll still be useful and no. 25, So will these. Goya probably intended to draw a comparison between this French commander, portrayed in his dying moments, and all those others, of lower rank, who find themselves in the same situation.

The etching plate is conserved in the National Chalcography Museum (cat. 257)