With or without reason (Con razón o sin ella) 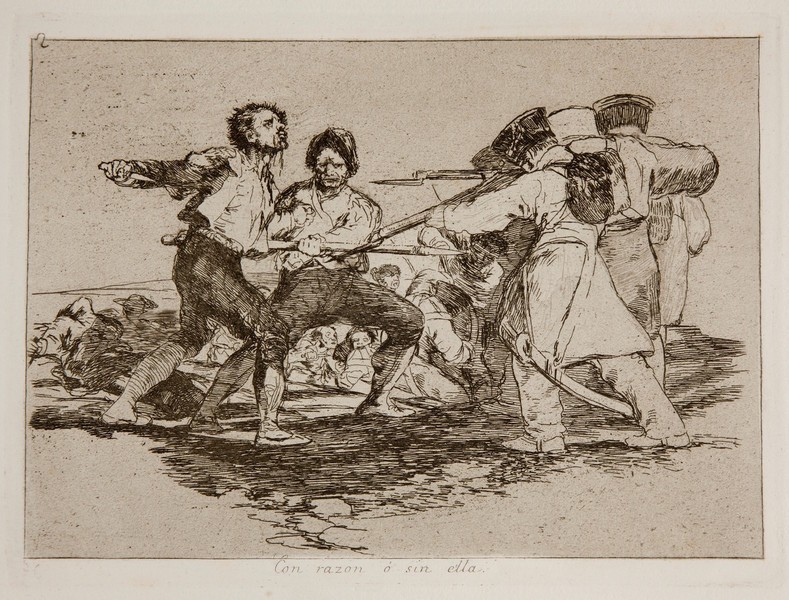 The second surviving state proof shows touches of drypoint on the soldiers on the right-hand side of the image and the lavis, or open-bite etching, has been applied right up to the edges of the print. This impression was made in greyish-brown sepia ink.

The title was handwritten by Goya on the first and only print run that we know to have been made at the time, and which the painter gave to his friend Agustín Ceán Bermúdez. The title was engraved on to the copperplate at a later date, and no other modifications were made to the image for the first edition of the Disasters of War. This edition was printed by the Royal Academy of Fine Arts of San Fernando, Madrid, in 1863.

In With or without reason a pair of Spanish soldiers confront three French soldiers, who are lined up like a firing squad. One of the Spaniards, bleeding profusely from his nose, wields a dagger in one hand and holds his head up defiantly. The other, standing slightly further back, looks out at the viewer, with an expression that betrays a mixture of pain and fear, whilst he holds up a spear. As all this is going on, in the background we see a number of figures locked in a bitter struggle, perhaps trying to avoid the same fate as those who about to be executed in the foreground.

As it is, the weapons wielded by the Spaniards can do little or nothing against the rifles and bayonets of their opponents, which are clearly outlined in the etching. Goya thus shows us, in this image and in many others in the Disasters of War series, how, facing the well-armed French army, the Spanish mob had to make up for what they lacked in war material with sheer courage.

Just as in other prints in this same series and in the painting entitled Third of May 1808, Goya shows the executioners with their backs to the viewer and their faces concealed. This is most likely a way of alluding to the universal nature of violence, going beyond any specific features that might serve to identify the individuals concerned. This idea of universality is further underlined by the lack of any elements that belong to a particular landscape or a concrete physical space which might allow us to identify where these events are taking place.

This print is related to no. 3 in the series, The same. Goya establishes an analogy between the present scene and that which follows and which depicts the opposite situation: Spaniards brutally slaughtering a group of French soldiers. Through these images, which are simultaneously consecutive and parallel to one another, the artist expresses his inability to justify these two acts or to exonerate these two equally unacceptable examples of violence.

The etching plate is conserved in the National Chalcography Museum (cat. 253)