Christ on the Cross (Cristo crucificado) 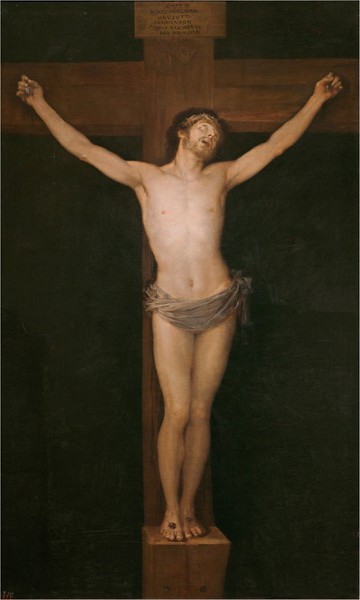 This painting was delivered by Goya to the San Fernando Royal Academy of Fine Arts on 5 July 1780 on the occasion of his being elected a member of the academy in the same year. In 1785 the painting was moved to the Church of San Francisco el Grande in Madrid, where it stayed until 1836, when it was seized by the committee of the Academy in response to confiscation measures under the disentailment act, passing to the Convent of la Trinidad, which became a national museum. It remained there until it was entrusted by Royal Decree of 22 March 1872 to the Prado Museum, then called the National Museum of Painting and Sculpture.

The marble white body of Christ on the cross is presented against a black background. The figure is painted in an entirely academic style, both in terms of the execution and the anatomy, which is typical of depictions of the young deity. The painting is designed to be a display of technical skill. Nevertheless, it was criticized for a lack of religious feeling and decorum: Goya had dedicated all his attention to artistic aspects of the work and the sculpting of the figure while ignoring the spiritual element of his theme. It is true that the pathos of the dying man is missing here, as is the almost inert quality given to the Messiah's body in other representations of the same subject. Indeed, this Christ seems to have hardly suffered a scratch, although there is passion in the face of the crucified man, who lifts his head to the sky, pleading for mercy and expressing profound suffering. Beruete insists that the way the emotion is concentrated in the face and not reflected in the rest of the figure is a result of forced sentiment. As Sánchez Cantón commented, Goya's Christ is an exam piece rather than a devotional painting, destined for the Academy where Mengs' neoclassicism was very popular.

At the top of the cross there is an inscription on a plaque with the standard phrase in Hebrew, Greek and Latin which reads "Jesus of Nazareth, King of the Jews". According to Camón Aznar, this plaque was not painted by Goya but was added at a later date. This supposition is based on the fact that it was discovered that beneath the plaque there was a cloth which hung down inscribed with slanted lettering spelling out the same words which was in fact painted by Goya. Moreover, in a document dating from 1816 in which the painter addressed himself to the Academy regarding the payment for his equestrian painting of Ferdinand VII, Goya refers to the Christ on the Cross and its move to the Franciscan Church, commenting that the work had been damaged. Given that the painting was well conserved, Camón concludes that the adjective estropeado ("damaged") is used by Goya to subtly express his anger at the repainting of the plaque, which was presumably carried out during its move to the church.

The iconographic model used by Goya for the painting was, without a doubt, the Crucifixion painted by Mengs for the Palace of Aranjuez in Madrid, with its four nails, plinth and inscription in Greek, Latin, and Hebrew. A preparatory sketch for this work is housed in the Prado Museum. It has been said that Goya was also influenced by the Christ of the Church of San Ginés, where his nephew Mariano was baptized.

There is a copy of this work in the Museum of Santa Cruz in Toledo which Gassier and Guidol consider to be a replica. Guidol dates that version as having been produced 10 years after the original. Other academics such as Camón also concur that it is a copy based on the weak technique it displays, and posit the theory that it is another copy by Felipe Abas, like that which is housed in the Aragonese Royal Economic Society of Friends of the Country in Zaragoza.

The painting was relined and restored when it was moved to the Church of San Francisco el Grande in 1780.