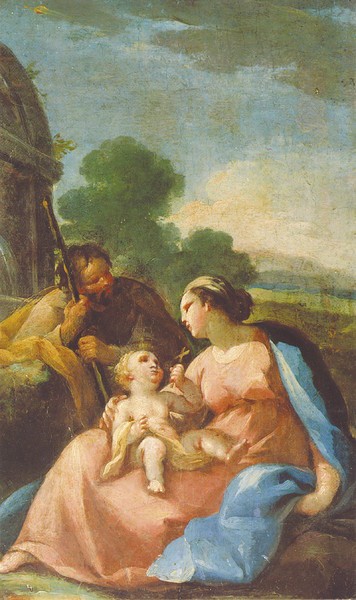 According to Guidol, this painting came from a family from Fuendetodos (Zaragoza). It later belonged to the Simonsen Collection in Sao Paulo, and is currently part of a private collection in Switzerland.

This work was first published by Gudiol. It shares its provenance and history with that of the painting Weeping over the Dead Christ, and it has occasionally been suggested that the two painting form a pair. However, it is clear that they do not in fact go together, as confirmed by the difference in supports.

In the painting we can see Joseph, Mary and the Christ Child next to a building. In the background there is a wooded landscape which denotes a pastoral scene. The figures are executed as if this were a sketch, and this would explain the painting's small size, although it could also be a small family devotional painting.

The composition makes reference to Holy Family with the Infant Saint John the Baptist, an engraving from 1642 by Michel Dorigny.

Goya's version simplifies some details, such as Jesus' feet or Mary's hand, which have been expressed with rapid brushstrokes. Moreover, we can see the way that Mary's thighs have been painted a touch too long: this elongation will be a recurring feature in Goya's work.

The work's date is subject to much doubt. The date indicated above is that proposed by Gassier, Wilson, and Gudiol. Arnaiz believes that the painting was carried out later, since some of its features are more advanced than those of earlier works dating from end of the 1760s. It is possible that its supposed provenance of Fuendetodos has led people to believe that it was an early work, but Arnaiz sees similarities in the treatment of the faces, trees, and sky between this work and Goya's tapestry designs from 1775-1776, and therefore dates the work as being from 1773-1775.

The head of the Christ Child shows reworking which has been confused with a restoration which did not take place.