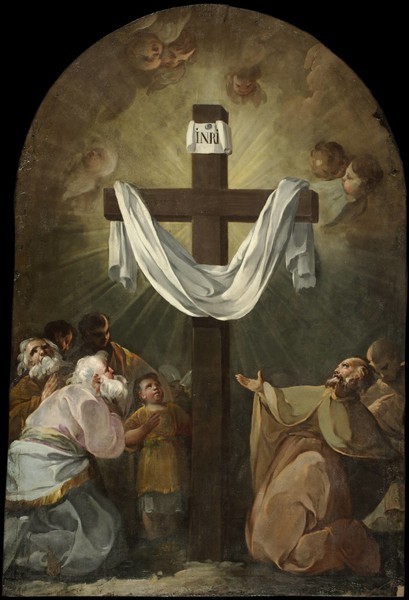 Recorded by Gudiol as an original Goya, he dated the work as being from the artist's Zaragoza period. According to the historian, the painting came from a town close to Fuendetodos, and subsequently featured in the Paraíso collection in Zaragoza before later entering into the possession of Guidol himself.

The image depicts a group of figures kneeling before the Sacred Cross. A host of angels flies above them. The canvas is semi-circular in shape.

Guidol highlighted the "original chromatic spectrum" of the paintwork and the "abrupt technique" employed, which gives the impression that the artist was working on an urgent commission. It has been suggested that the work was intended as a devotional piece for a private oratory in Fuendetodos, or for the parish church of that town, where Goya had painted the reliquary. Equally, others have proposed the theory that this work was a commission intended to decorate the Church of Santa Cruz in Zaragoza.

The clumsy union of canvas and frame on the left-hand side of the composition is striking: due to the canvas being too short, the artist had to paint directly onto the wood, which even affects the head of one of the worshippers.