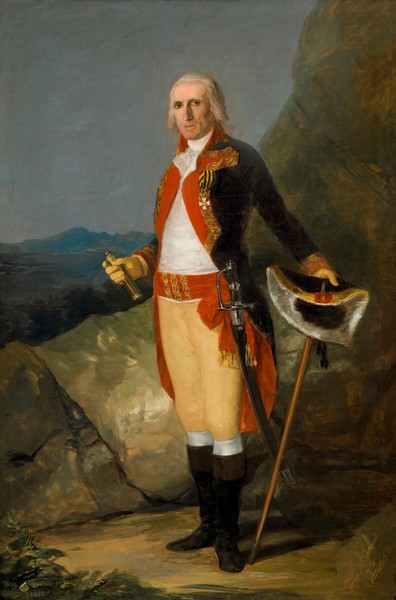 The Dukes of Osuna commissioned this work in 1798, at which point General had already retired from all public offices due to his strained relations with Manuel Godoy.

It was acquired in 1896 in an auction by the Ministry of Development from the descendents of the Duchy of Osuna via the General Directorate of Public Education and Fine Arts in order to be placed in the Prado Museum.

General José de Urrutia, (Zalla, Vizcaya, 1739 - Madrid, 1809) was the only military figure without a noble title to reach the rank of Captain General, a feat he achieved due to his outstanding action on the battlefield. He fought against the French in the Pyrenees and was named Captain General of Catalonia in 1794.

The painter has placed the subject before a rocky background wearing a military uniform with black and red frock coat: attached to his lapel is the Saint George's Cross which he was awarded by Catherine the Great for his action in Ozaku (Crimea). He is carrying a spyglass in his right hand and a walking cane and three-cornered hat in his left.

Light bathes the whole figure in a uniform way rather than just illuminating his face, emphasizing the lively colours which bring joy to the scene. The work is imbibed with psychological meaning, while the influence of Reynolds and other English portrait artists is also evident.