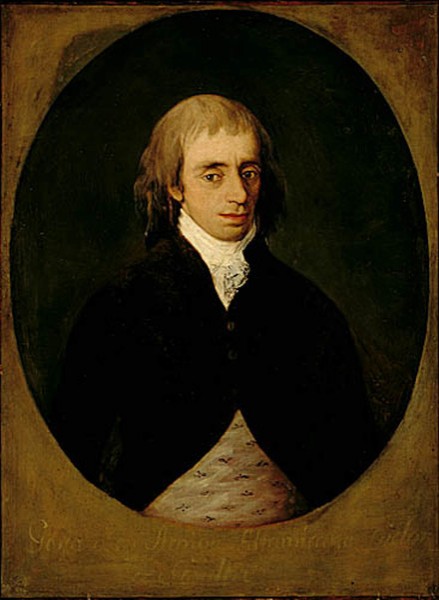 Goya a su Amigo Altamirano Oidor / de Sevilla ("[From] Goya to his friend Altamirano, Judge of Seville", bottom of canvas).

This work was acquired by John W. Tempest and entered the museum's collection in 1905.

Carlos López Altamirano, one of the ilustrado friends of Goya and Jovellanos, was rector of the University of Salamanca (1779-1782), magistrate and judge of the Royal Court of Seville.

This portrait of him is especially sober, but is not at all lacking in directness and expressiveness. The subject is shown in front of a neutral, dark background, half length and turning slightly to the side. He is wearing a black jacket fastened with three buttons and a white neck tie. Of particular interest is the sash that pokes out from underneath the jacket, and which is meticulously decorated with some unusual needlework. On his less than attractive face, his large, sad eyes stand out, along with his prominent nose, large mouth and thinning hair.

He is presented enclosed inside an oval, as occurs in several other portraits by Goya, including that of Ramón de Posada y Soto (1794), Jovellanos' brother-in-law, or that of his friend Martín Zapater (1797).

Altamirano may have posed for Goya during the painter's second stay in Andalucía (from the summer of 1796 to the spring 1797).