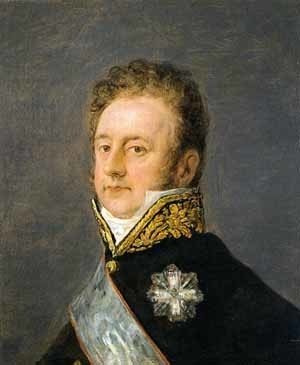 This portrait, which may or may not be by Goya, was rediscovered in 1989 in a private collection. After examining the work, Manuela Mena decided that it was an autograph work and decided to include it in the exhibition Goya in Times of War. An old gallery attribution also connected it to Goya. Other specialists, such as Nigel Glendinnig and Jesusa Vega, have been reluctant to back this attribution, whilst Juliet Wilson is of the same opinion as Mena, adding however that the painting is not in a good state of preservation.

On 27 May 1815, Spain's ambassador in Vienna, Camilo Gutiérrez de los Ríos, wrote to the Spanish Secretary of State, Pedro de Cevallos, that Prince Metternich, married to the cousin of Kaunitz-Rietberg, wished to name Alois Wenzel ambassador to Spain, recalling that his grandfather and his uncle had held the post during the reign of Charles III. The position had remained empty following the Spanish War of Independence and the new Austrian ambassador, Kaunitz, arrived in Madrid in August 1815. His work as ambassador did not last long, however, with the Duke of San Carlos, the Spanish ambassador in Vienna, reporting the reprehensible behaviour of the Austrian. He left office in December 1816 and left the country in January 1817. Goya, as Court Painter, would have made this portrait at some point between his arrival and departure.

The work was in the collections of Metternich & Károly, related to Kaunitz by marriage. It appears that Kaunitz gave the work as a gift to one of the family's daughters instead of putting it up for sale with the rest of his paintings, in 1820. The portrait went to the Jürg Stuker gallery, in Berne, where a commercial exhibition, Privatsammlung Jürg Stuker, Altes Schloss Gerzensee, was held from 26-31 October 1989. In the exhibition, the work was attributed to Goya and was assigned number 119. It went to the collection of Eric Turquin, in Paris. It was subsequently reacquired, in 1990, by its previous owner. On 29 January 2009, it was put on sale through the Sotheby's auction house in New York, where it sold for about 2,210,500 US dollars.

Prince Alois Wenzel von Kaunitz-Rietberg (Vienna, 1774-Paris, 1848) was a chancellor belonging to a powerful Austrian family. He held posts as Austrian Ambassador in various European courts: at Dresden, possibly at Naples, although this has not been confirmed, at Madrid and at the Holy See. The serious accusations of the Duke of San Carlos must have been related to the child abuse charges that came to light in 1822. The chancellor was interrogated, put under surveillance and finally banished from Austria. He went to Paris, where he later died.

X-rays have revealed marks from the stretcher, which appear to indicate that the portrait was previously slightly larger than how we now see it. Kaunitz is shown in official dress, with pride of place given to the sash and star of the Order of the Dannebrog, which he received during his time as ambassador in Dresden. The sash is not very clearly defined, leading to suggestions that the portrait was left unfinished. However, the order's motto is perfectly legible: GUD/OG/KON/GEN (God and the King). The jacket collar is decorated with golden needlework, rendered in thickly applied paint, which contrast with the light touch employed by the artist in the curly hair and the face. All of our attention is focused on the sitter, since the neutral background offers no distractions of any kind. The psychological insight of the painting reveals a subject who was intelligent, somewhat arrogant, but with a sense of humour and cultured, as his art collection and his contacts and friendships within intellectual circles confirm.

This person has been unknown for years; in 2008, the Prado Museum identified the Prince Alois Wenzel von Kaunitz-Rietberg due to an important research.