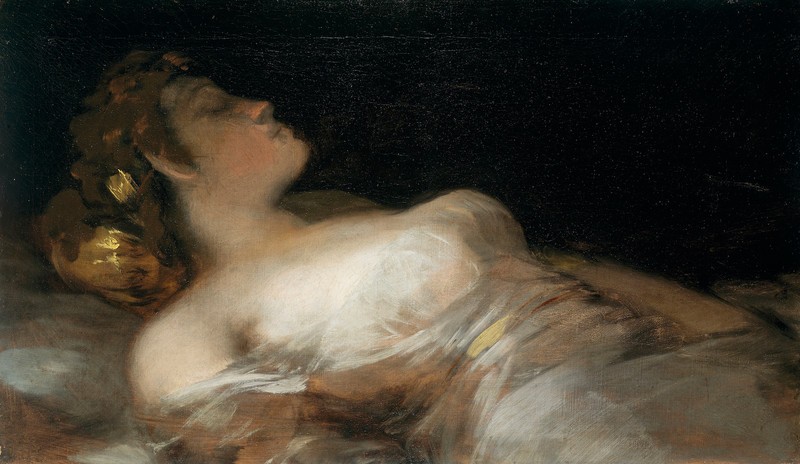 We do not know who commissioned this work, when it was made, or its provenance. Some scholars believe that it may be one of the three overdoor pieces painted for Sebastián Martínez during the winter of 1792 and 1793, when Goya was staying in the Cádiz home of the ilustrado businessman and art collector whilst recuperating from the illness that left him deaf. The two other pieces from that commission, Sleepy Girl and Women Talking differ from this work both in their dimensions and in their colours and tones, although it is possible that this piece may have been cut down. Unfortunately, the subject of the third work cannot be known for certain since Antonio Ponz did not include these works in his description of the Martínez collection, and although the Count of Maule, Nicolás de la Cruz, mentions them in his book entitled Journey from Spain to France and Italy (Viaje de España a Francia e Italia), he does not specify their subject matter either. Jeannine Baticle proposes another possibility, suggesting that they may have been commissioned by Manuel Godoy, since he is known to have stored works of an erotic nature in his secret study. She therefore dates the work to between 1795 and 1805.

The first documentary references to the work appeared in around 1900. At that time the painting was in the collection of the Marquis of Casa Jiménez, in Madrid, and was then the property of his widow until 1924. It belonged to the collection of Matilde Korcherthaler, in Berlin, and then to that of her heirs. It was in the Heinemann collection, in New York, and then that of the firm of Thomas Agnew and Sons, in London, until it was acquired by the National Gallery of Ireland, with the help of the Shaw Fund, in 1969.

The painting is a three-quarter-length portrait of a beautiful woman as she sleeps peacefully. Such a subject is unusual in the work of Goya, who more often represents dynamic, action-packed scenes. The image inspires a somewhat unsettling sense of calm. The viewer is made into a voyeur or a peeping-tom, spying on the sensual young lady as she rests, covered only by the almost sheer gauze dress that envelops her. The greyish colour palette is applied in thin brushstrokes for the flesh tones and in other, much more thickly laden ones, for certain details, such as the ribbons in her hair and the sashes that encircle her waist. The whitish, milky lighting, reminiscent of moonlight, falls upon her bosom, concentrating the viewer's attention there and giving the impression that we might almost see her breathing.

The woman has not been identified as anyone in particular. Her face is not strongly lit and is half turned towards the back of the darkened room. It is possible that Goya did not wish to go into too much detail in order to avoid being criticized for a lack of decorum. However, the name of Pepita Tudó has been mentioned in relation to this work due to the resemblance between this depiction and those in the famous clothed and nude maja paintings and, above all, because of the possible connection to the secret collection of Godoy, whose romance with Pepita was well known.

Chronologically, a number of different dates have been put forward, given the different hypotheses concerning the commissioning of the painting. The first hypothesis would date it to 1790-1792, coinciding with a possible commission by Sebastián Martínez. The second would place it to between 1801 and 1808, the years in which the maja paintings were executed and the paintings to decorate the residence of Godoy when he again became prime minister were commissioned.