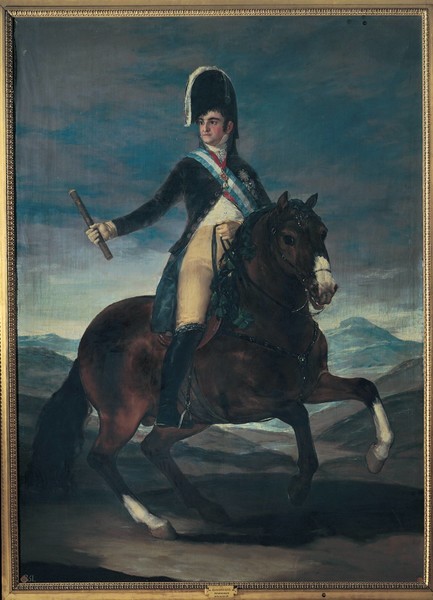 This portrait was commissioned on 29 March 1808 by the Royal Academy of San Fernando to be hung in its meeting room, shortly after Ferdinand was proclaimed King of Spain following the abdication of his father, Charles IV.

The academy fixed the price at a hundred and fifty doubloons and, as a gift, a copy of the book Arabian Antiquities from Granada and Cordoba (Antigüedades árabes de Granada y Córdoba). The painting was delivered to the academy on 6 November 1808.

Ferdinand VII (San Lorenzo de El Escorial, 1784-Madrid, 1833) was proclaimed King of Spain in 1808. After the expulsion of Joseph Bonaparte, he ruled again from 1813 up until his death. His reign was characterised by a return to absolutism and the persecution of liberals and afrancesados, or supporters of the French.

For this portrait, Goya requested that the king pose for him in person, which he did for just three quarters of an hour on two occasions, since Ferdinand VII had to leave Spain and did not return until 1814, when he was finally able to see this portrait for the first time.

The monarch is depicted on horseback, wearing the uniform of Captain General, with dark frock coat, yellow trousers, riding boots, two-cornered hat, baton and medals, along with the sash of the Order of Charles III. He is shown in a natural landscape, over which the cloudy sky is clearing and changing to a lighter tone in the far distance, where some mountains are visible. The horse is lifting up its front legs in a prance.

There exists a preparatory sketch for this portrait in the Museum of Agen, France.