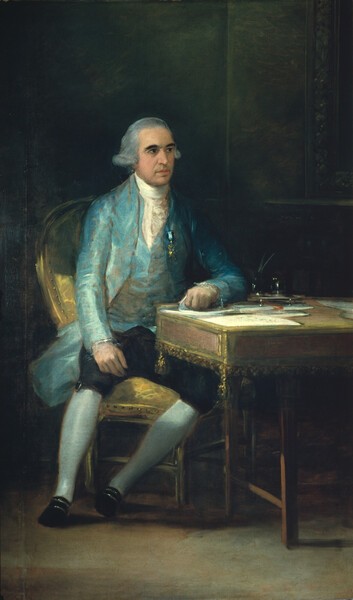 According to a letter written by Goya to his friend Martín Zapater on 27 March 1798, this painting was commissioned to Goya by Jovellanos. The work was paid for on 19 July 1798. In 1800 the canvas was being kept at Jovellanos's house in Gijón; on his death it remained in possession of the Cienfuegos-Jovellanos family. It later formed part of the collections of Alejandro Pidal of Madrid, Baussod and Valadon in Paris, and Baron Cochin before being sold at auction in the French capital in 1919 to M. Knoedler, London. In 1928 the Frederic Muller Gallery in Amsterdam sold it to its last owner Viscount Lee de Fareham.

Francisco de Saavedra, (Seville, 1746 - 1819) was named Secretary of State in 1788 (Finance Minister). During the Spanish War of Independence, he presided over the Supreme Junta of Seville, and formed part of the Council of the Regency in 1810.

Don Francisco is shown seated next to a table with papers and an inkwell on it. He is dressed in a blue frock coat and waistcoat, white shirt, velvet trousers and stockings. He is wearing the Order of Charles III, which he was awarded in 1782.

The dark background makes the colours of his clothing and the golden hues of the furniture stand out.

It is one of Goya's most accomplished portraits in which, according to Gudiol, the natural pose of the figure is perfect, while the execution of the piece is almost photographic.