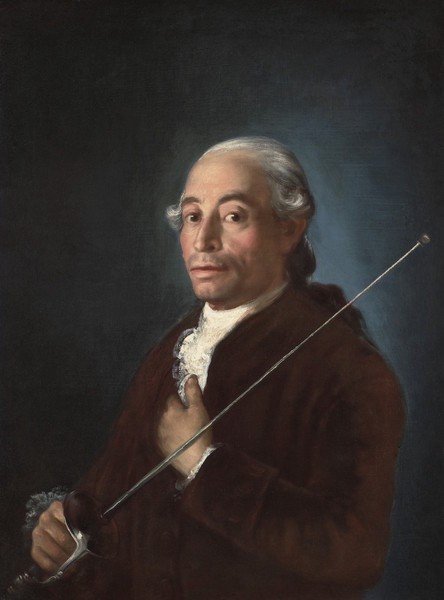 This work was in a private collection in Madrid before entering the Wildenstein collection, in New York.

It was acquired by the Meadows Museum, Dallas, in 1967.

The identity of the person depicted in this portrait is not known for certain. Nordström identified him as the architect Francisco Sabatini and both Gudiol and Jordan point out that this is the same person who appears behind the Count of Floridablanca in Goya's portrait of him (1793), which now belongs to the Bank of Spain. Luna speculates that this person may be a secretary of Floridablanca or an individual who took care of different functions within the Court, such as that of fencing teacher, for example.

He appears here in half profile in front of a neutral background, which serves to give a heightened sense of volume. Standing out from his dark coloured dress coat is the lace at the neck and the cuffs. His right hand is tightly gripping a fencing foil.

Part of his left hand is hidden inside his coat, in a gesture which was very common in Goya's portraits.

In his face we can read his mood, as he looks out at us with a certain air of distrust.