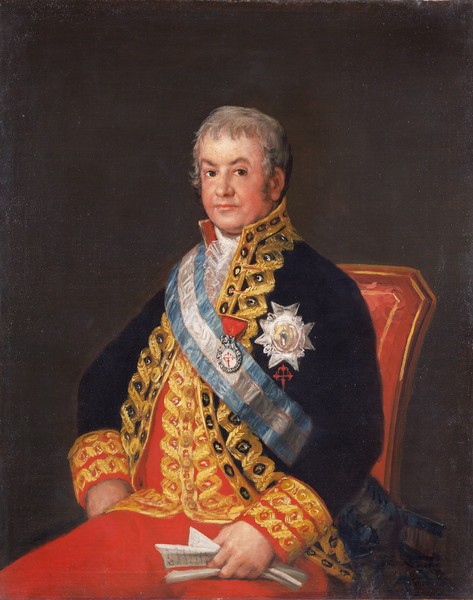 Excmo. Sr. / Marques de Caballero / Ministro de / Gracia y / Justicia / por Goya / 1807 ("His Excellency the Marquis of Caballero, Minister of Grace and Justice, by Goya, 1807", on the piece of paper in the subject's left hand).

This painting came from the collection of the Marquis of Corvera and was painted to hang in the Ministry of Grace and Justice. It was later in the Bayo and Pares collections, in Madrid. The Museum of Budapest acquired it in 1906.

He inherited the title of Marquis of Caballero in 1807. This portrait of him forms a pair with that of his wife, the Marchioness of Caballero, also painted by Goya.

The three-quarter-length painting shows the subject seated on a chair upholstered in red velvet with gold edges. He wears the uniform of minister, black frock coat with gold borders, red waistcoat and matching red trousers, and a white shirt with frills poking out at the neck. On his chest he wears the white and blue sash of the Order of Charles III, over which the Grand Cross of the order hangs. On one side of the frock coat we see the knight's insignia of the Order of Santiago, of which the sitter was also a member. In his left hand he holds some papers, on which are written the name and position of the subject together with the painter's signature and the date the portrait was made.

Their are considerable differences between the rapid, thickly loaded brushstrokes used on the sitter's clothing and medals and the fine, delicate ones of his face, which are applied with great care and skill. The sitter peers straight out at the viewer with an intense, keen and intelligent look in his eyes.

A replica of this painting exists in the Lowe Art Museum in Miami, United States, on loan to the museum from the Oscar B. Cintas Foundation.