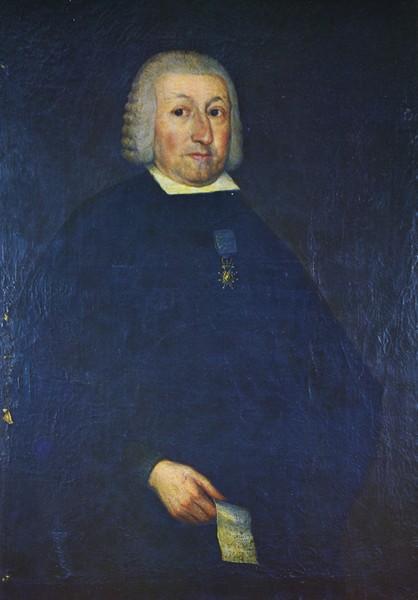 El Illmo. Sr. Joseph Cistue ("His Most Illustrious Señor Joseph Cistue", on the letter the sitter is holding in his right hand).

It is highly likely that this portrait was made by Goya for the sitter's family at the same time as the one for the Sertoriana University in Huesca. It was acquired by Ibercaja in 1976 from Pablo Cistué de Castro and his siblings.

José Cistué y Coll, first Baron of La Menglana, was a professor at Huesca's Sertoriana University. A board of professors at the university decided to commission Goya to paint this portrait to commemorate this same appointment.

In this full-length portrait, the subject is wearing a black robe with white cuffs and magistrate's collar. In his left hand he holds a letter, whilst his right hand is hidden behind the robe. On his chest hangs the Cross of Charles III. His head is covered by a white wig. The composition bears many similarities to that of the portrait of Antonio Veyán, also commissioned by Sertoriana University and now housed in the Museum of Huesca. The subject's posture is very similar, as well as the way in which the artist has treated the light. It is possible that these two works were meant to hang next to each other, since they have exactly the same dimensions.