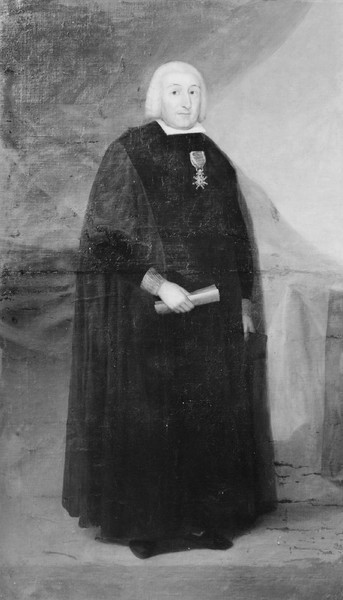 The letter and receipt for the payment for this work, signed by the painter, reads: "I received from Señor Don Francisco Garasa three thousand and forty-four reales, in payment for the portrait of His Most Illustrious Señor Don Josef de Cistué, which I painted by order of the University of Huesca to be hung in its faculty. Madrid, 19th June 1788". At an uncertain date and for reasons largely unknown, after the disappearance of Sertoriana University and the dismantling of the gallery of portraits that hung in the assembly hall in Huesca, the work entered the possession of the sitter's family.

José de Cistué y Coll (Estadilla, Huesca, 1723-Zaragoza, 1808), the second Baron of La Menglana from 1803, studied Law at Huesca's Sertoriana University, where he occupied the professorship of Canon Law in 1749. A prominent lawyer, he carried out his career as magistrate in the Americas, as attorney for the Court of Quito, judge for the Court of Guatemala, and criminal magistrate and judge for the Court of Mexico. In 1787 he was named attorney of the Council and Chamber of the Indies in Madrid, a post which he held until his retirement in 1802. In that same year, 1787, King Charles III awarded him with an honorary cross of the order bearing his name, and also named him minister of the Commerce and Currency Board and of the Council for the Arrangement of Military Decrees, marking the high point in his career. These appointments led a board of professors of the Huesca university to commission this painting.In the full-length portrait, the subject is wearing a white wig, black robe and white magistrate's collar. In his left hand he holds a rolled-up document. On his chest hangs the Cross of the Royal Order of Charles III. This work is similar in proportion and shares many formal points with the portrait of Antonio Veyán y Monteagudo, another commission from Sertoriana University and now housed in the Museum of Huesca. Both pieces formed part of a gallery of portraits in the university's assembly hall. For the subject's family, Goya made a half-length version of this painting and, in 1791, also painted a portrait of José de Cistué and María Josefa Martínez de Ximén's son, Luis María de Cistué y Martínez.

The inscription located at the bottom of the canvas, which had previously been covered up, was discovered during restoration work carried out in 2008.