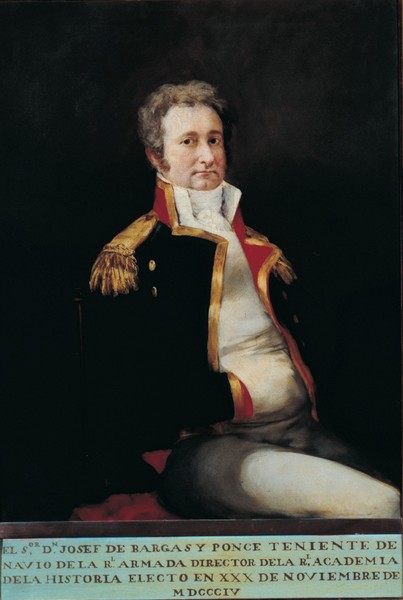 The Royal Academy of History commissioned Goya to paint this portrait on 10 May 1805, and the artist was paid for his work in 1806. Since then it was always belonged to this same institution.

José de Vargas Ponce (Cádiz, 1760-Madrid, 1821) was painted by Goya after being named director of the Royal Academy of History. He wrote plays and satirical poetry. He enlisted in the navy in 1782, was a midshipman, and reached the rank of captain. He was also liberal minister for Madrid from 1813 to 1820.

José de Vargas wrote to Ceán Bermúdez, also painted by Goya, to act as mediator between himself and the artist: "I want Goya to do it, who has been approached about the matter and who has given his consent. But I also want you to send him a brief note, telling him who I am and our mutual relationships, so that, seeing as this is something that the academy demands, it will not be a hasty mess, but rather the way he can do it when he really wants to".

The subject is shown sitting in front of a neutral background, wearing naval gala uniform, with his right hand concealed inside his waistcoat and his left hand hidden behind his back. This is a simple portrait in which, despite the important position held by the sitter, Goya paints him, according to Manuela Mena, as an informal and warm, yet self-confident, person.

The jacket, with its gold borders and buttons, heightens the luminosity of the portrait and the elegance of its subject.