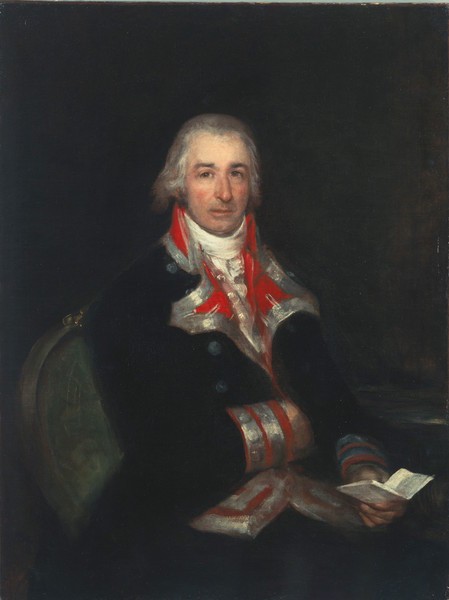 This painting was in the possession of the Queraltó family in Madrid until 1900, when it had a string of new owners: J. Böhlerm, Munich; James Simon, Berlin; and K. Haberstock, Berlin. It was acquired by the Alte Pinakothek in 1925. Today it is located in the Neue Pinakothek.

This painting was made only three years before the death of its sitter. José Queraltó was a highly prestigious military doctor. In Spain he became chairman of the Royal College of Medicine of San Carlos, in Madrid.

The figure is shown seated and wearing the uniform of the official navy doctor; the neutral background behind him helps to enhance the sense of volume. His dress coat is barely distinguishable from the background, with just the red of the collar and the cuffs standing out. His right hand, as was customary in many of Goya's portraits, is hidden inside his jacket, whilst in his left hand he holds a paper with his own name and the painter's signature.

The brushstrokes employed on the clothing are quick and loose, in contrast to those of the subject's face, which are more deliberate and heavily loaded.