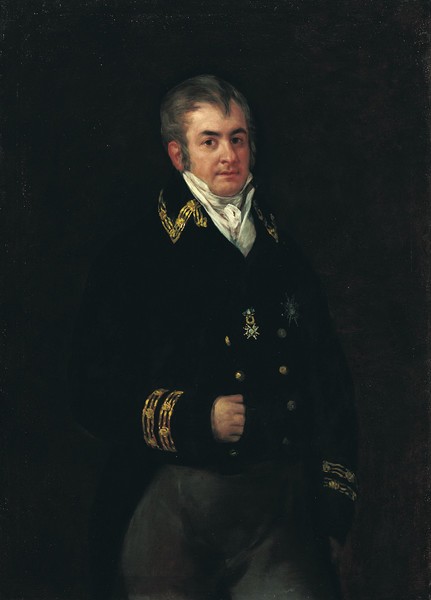 This portrait, and that of the sitter's wife, Narcisa Barañana, with which it forms a pair, first came to light in an exhibition in Madrid in 1900, when they belonged to the Moret Collection, also in Madrid. Before 1947, the portrait of Juan Bautista was in the collection of Baron M. Herzog, of Budapest. It was eventually acquired by the Karlsruhe museum.

The subject of this portrait has been identified as Juan Bautista de Goicochea y Urrutia, related by marriage to Martín Miguel de Goicoechea, Goya's son's father-in-law and the subject of another of the artist's paintings. Born in Elorrio (Vizcaya) in 1772, he was named "Caballero Pensionista" of the Order of Charles III in 1815, when he was an officer of the Secretary of State and the War Office. The medals he is wearing correspond to this office, and not to the Royal Order of Spain, as some writers have claimed, adding that the painting would have been made around 1810, during the occupation of Joseph Bonaparte. More likely is the theory that Goya made the painting around 1815, to commemorate the sitter receiving the honours of the Order of Charles III, during the reign of Ferdinand VII.

The three-quarter-length portrait depicts the sitter in uniform, the dark tones of his clothes blending into the neutral background which is so common in Goya's portrait works. The only parts that are lit are his face, expressive and lively, and the white shirt that reaches up to his chin. His right hand is concealed within the jacket that holds his medals. He wears his hair in the fashion of the period, with long sideburns.

According to Gudiol, this work belongs to Goya's most lavish portraits, those that present a synthesis of full, rich shapes with a warm colour palette.