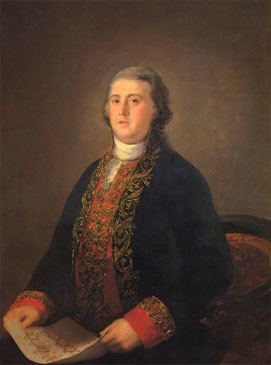 In 1947 this work was acquired abroad by Juan Gómez Acebo y Moret, Marquis of Zurgena. In 1955 it was donated to a new owner.

For a long time this was thought to be a portrait of Antonio Gasparini, the son of a Neapolitan who worked on the decoration of the Royal Palace in Madrid. But Barreno identified the sitter as Juan López de Robredo, who, following his father's death in 1788, inherited the post of Court Embroiderer at the palace. In allusion to his trade, he is shown holding an embroidery model or pattern, the design of which matches that worn by court embroiderers on their uniforms.

There is a certain lack of proportion between his head and his torso, which is dressed in a jacket and high-collared shirt. The lighting is falling mainly on his face and neck.

According to Gudiol, the drawing and the lines, just as in most of Goya's works made before 1800, always maintain a certain vagueness thanks to a barely perceptible but constant use of a "sfumato" technique.

A replica of this work is known to exist.