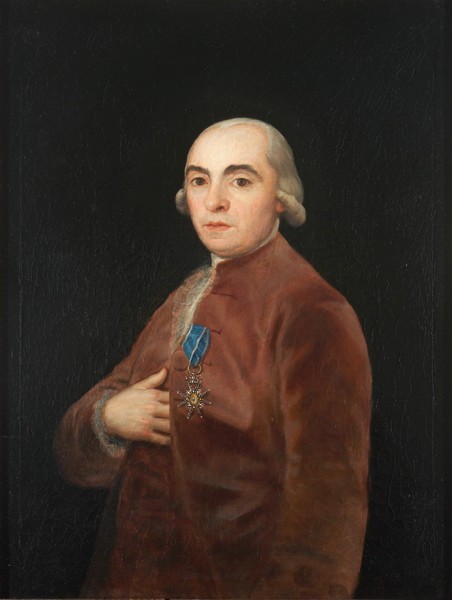 This painting belonged to the family of the sitter, who possessed several works by Goya. Through successive marriages and inheritances it has been the property of the Counts and Countesses of Sobradiel, Gabarda, and Orgaz and the Marquises of Las Palmas. In 1997 it was acquired by the Government of Aragón through Sotheby's for the Museum of Zaragoza.

Juan Martín de Goicoechea y Galarza Ziordia y Albizu (Bacaicoa, Navarre, 1732-Zaragoza, 1806) was one of Goya's best friends in Zaragoza. After finishing his studies in this city he moved to Lyon, where he studied commerce and learned the art of manufacturing silk. In 1772, upon returning to Zaragoza, he founded his own factory and soon became the most important trader and businessman in the city. A liberal and ilustrado, he was a founding member of Aragón's Royal Economic Society of Friends of the Country and maintained, at his own expense, a Drawing School created by that institution which was active from 1784 to 1792, the year in which the San Luis Royal Academy of Fine Arts was created. In 1789 he was awarded the minor Cross of the Royal Order of Charles III.

The half-length image of the subject is shown against a black background. The figure, in half profile, is looking straight out at the viewer. He is dressed in a brown dress coat, from which the cross of the Royal Order of Charles III hangs. His right hand is partially concealed within the coat, to one side of the decoration.

The pale skin tones of the figure's face and hand stand out in sharp contrast with the deep, uniform black of the background. After the work was cleaned in 2008, the subtle velvet qualities of the coat became evident, as well as the deftly painted sheer lace poking out from underneath at the cuffs and shirt front.

Goya would have been able to make studies for this portrait from life during the 23 days in October 1790 in which he was in Zaragoza, although the work would have actually been finished in Madrid in December of that same year.

The Aragonese Royal Economic Society of Friends of the Country possesses a version of this portrait, which has led to various hypotheses about its authorship and date. Everything seems to indicate that the other work is a copy by an unknown artist and not the portrait that this institution commissioned from the painter Juan Andrés (Merclein?) in 1787, since its style differs considerably from other works known to be by this artist.