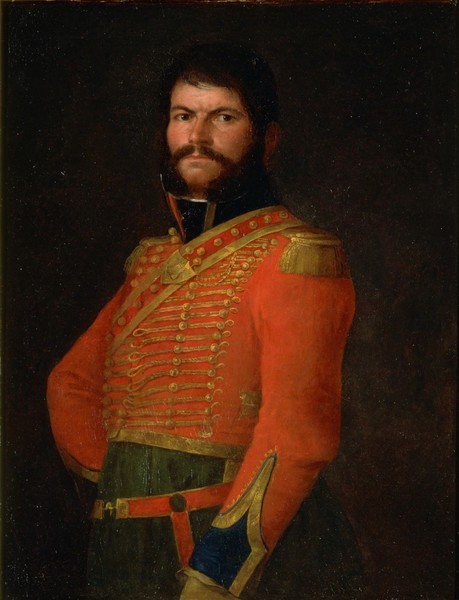 This work belonged to the collector Luis Navas. It later left Spain and was in various foreign collections: that of Wasserman, in Munich; that of Bossard, in Lucerne; that of Robert Neugebauer, in Cologne; and was finally in another private collection in Zurich. It was subsequently acquired by the Aino Gakuin Institute of Osaka, Japan, and taken to the National Museum of Western Art, in Tokyo.

Juan Martín Díaz, known as El Empecinado ("The Undaunted") (Castrillo de Duero, Valladolid, 1775-Roa, Burgos, 1825) was a Spanish guerrilla who fought against the French in the Spanish War of Independence.

This portrait's movement through numerous foreign collections has made a study of the work difficult, and for this reason it has been excluded from some of the most important catalogues of Goya's work. But over time it has been rescued from anonymity and is now considered by most specialists to be an original work by Goya. Almost all the experts date this work to the years of armed conflict against the French forces, as suggested by the military nature of the work and the very biography of its sitter, but it was Arturo Ansón who was able to date it precisely to the year 1809.

El Empecinado was named cavalry captain by the Supreme Junta of Old Castile in April 1809, and was promoted to brigadier in September 1810. Here we see him wearing the uniform of captain, meaning that the work must have been painted at sometime between these two dates. Moreover, we know that Goya and El Empecinado were both in the same French-free zone at the beginning of 1809, sometime before spring, which was when Goya returned to Madrid. They were in Piedrahita (Ávila) and in Béjar (Salamanca), respectively, some 40 kilometres apart. It is likely that Goya painted this portrait of the soldier in the month of April.

The half-length portrait shows El Empecinado in half profile and looking out at the viewer. He is dressed in the bright red jacket of cavalry captain, with golden epaulettes at the shoulders. The details on the uniform are also gold, including the buttons, laces and needlework. He wears a sash decorated with the coat of arms of Castile standing out in relief across his chest. His trousers are of a dark green colour and the belt from where his sword would have hung is red. His right hand is on his hip, whilst his left hangs down at his side. Both of his hands are hidden from view. The most striking part of the portrait is the subject's face. Goya has set out to reflect his psychological insight into El Empecinado in the expression of bravery and might that shows through on his face, which is dominated by his dark beard and moustache.

The painter Salvador Martín Cubells made a copy of this portrait, which is now in the Royal Academy of History, in Madrid.

The Army Museum in Madrid has a photograph of the portrait, the caption of which says that the work once belonged to Don Luis Navas. We can assume that it was this collector who delivered it to Ricardo de Madrazo, who in turn gave it to Lieutenant Colonel Hilario González, the person in charge of the museum, to illustrate the personal belongings of El Empecinado. This story appears to confirm that the portrait was in the possession of Luis Navas but Carmen Montilla has detected some differences between the image in the photograph and the painting now in Tokyo. This suggests the possibility that they are not the same painting and that two versions of the work exist, one of which is in an unknown location. Alternatively, if they are one and the same painting, it is possible that a restoration has made changes to the original, affecting its quality.