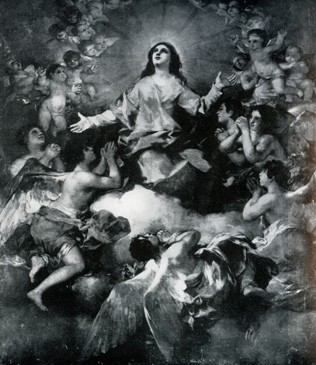 The painting was produced in 1812 for the main altar of the parish church of Nuestra Señora de la Asunción in Chinchón. This work is traditionally thought to have been commissioned by Camilo Goya, the chaplain of the parish church, following the fire and attack of the French troops on the church in 1808. Reconstruction began in 1819 and was finished in 1828, although it remained closed until 1840, while its parish functions were taken on by the convent church of the discalced Augustinians. These dates tell us that the inscription on the frame cannot be wholly accurate, since even if Goya had finished the work in 1812, the work could not have been hung in the church at that time.

On 7 January 1937, during the Spanish Civil War, the painting was removed from its usual location by order of the Spanish Commission for the Expropriation, Protection, and Salvage of Artistic Heritage. It was taken to Madrid still in its original frame. Although we do not know exactly where it was stored, it is thought that it would have been taken to the Prado Museum, since the work would have been considered important, given that it was signed by Goya. There is also a delivery document dated June 1940 and addressed to the representative of the parish, specifying the provenance from the Prado Museum of an unidentified work. During the years of the conflict, it is thought that the work continued the same journey as the works of the Prado, first travelling to Valencia, then to Catalonia and finally Geneva, from where they were returned in different consignments from 14 May 1939 onwards.

It has remained in the parish church of Chinchón since it was reopened and the painting was returned, excepting the period between 2004 and 2007 when the church underwent restoration work, during which time the painting was stored in the Prado Museum.

In the centre of the concentric composition we can see Mary ascending to the heavens surrounded by a great celestial host. Goya arranges a host of putti around the head of the Virgin, while young angels surround her feet. The highly theatrical staging and the depiction of the Virgin in ecstasy give the scene a decidedly baroque feel.

Experts see a clear link between the technique used in this work and the frescoes of the Chapel of San Antonio de la Florida in Madrid.

The work was restored at the Institute of Conservation and Restoration of Cultural Property (ICRBC), today the Spanish Historical Heritage Institute (IPHE).