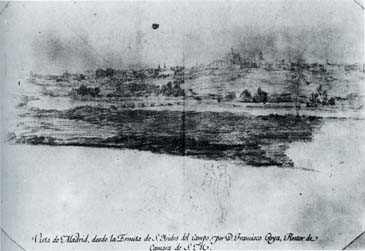 View of Madrid, from the Chapel of S. Ysidro del Campo, by D. Francisco Goya, Court Painter to H. M. (lengthways along the bottom, centred, written in ink)

This drawing shows the Madrid skyline, with the silhouettes of the most emblematic buildings clearly visible. We can also make out the shapes of the figures that were later to form the main group in the oil sketch, the majas seated on the ground and a pair of gentlemen petimetres, who are standing up and who were finally moved further into the background in the painting.

The work's authenticity has been vouched for by Sambricio as well as Xavier de Salas, who published it in an article in the magazine Gazette des Beaux-Arts in 1979. This writer sees similarities between this drawing and some of the views of Madrid painted by the vedutista Antonio Joli, who visited the court of Madrid between 1750 and 1754.