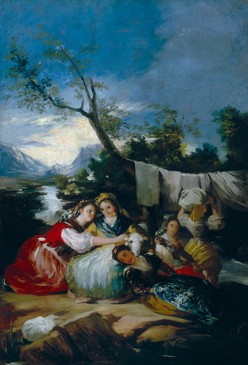 Sketch for the tapestry cartoon The Washerwomen.

This work tends to be compared with the sketch for Card Players due to the almost identical dimensions of the two works and because they both entered the collection of the Reinhart Museum at the same time.

The quality of this supposed sketch, although not great, is better than that of its companion, which was excluded from some catalogues which did however see fit to include that of The Washerwomen, such as that by Gudiol, who first brought the work to light. Other writers have included it in the catalogue of Goya's work but whilst expressing their doubts as to its authorship. Others have preferred not to include it at all. Camón says that the style of this painting is very similar to that of the sketch for the cartoon A Stickball Game.

Arnaiz points out that the sketch presents the same composition as the cartoon, which must have lost at least some 37 cm from its height and therefore suggests that it could be a reduction, an opinion that he also expresses about the sketch for Card Players.