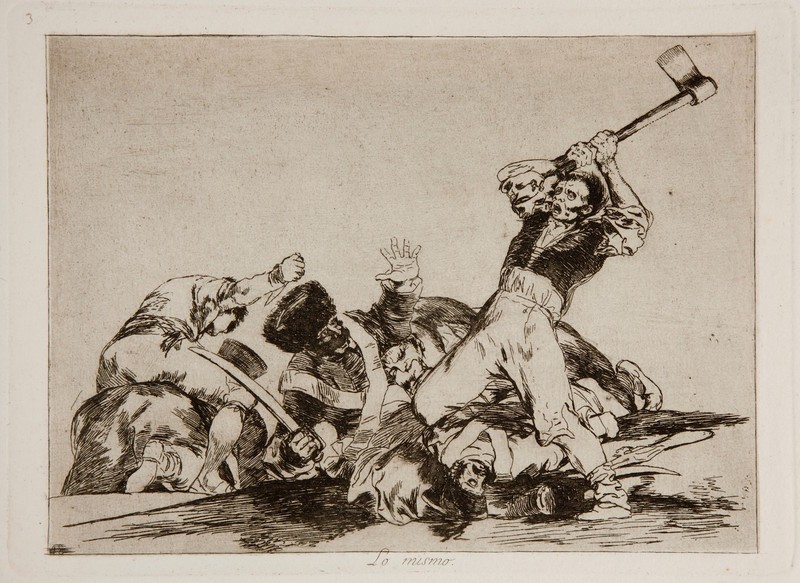 There exists a state proof of this print with lavis and burnishing over the lines on the right thigh of the man who is shown raising the axe. There is another state proof which bears the number 48. Later, the number 3 was added, along with some touches of drypoint and burin.

In front of a pale background we see, in the foreground, the silhouette of a man raising an axe in both hands as he opens his mouth to shout. He is a Spaniard, and is about to decapitate the Frenchman lying on the ground before him. Behind these two characters, Goya has depicted a tangle of bodies engaged in a vicious fight with all sorts of different weapons. In one case, a French soldier with a sword fends off the attack of a Spaniard. Further back, a Spaniard who has clambered on to the back of a Frenchman is about to stab him with a knife. The ferocity of the Spaniards has allowed them to overwhelm the better-armed enemy in brutal fashion.

In this print, Goya stays with the theme addressed in print no. 2, With or without reason, and traces between the two works an analogous relationship which serves to demonstrate that these two scenes are in fact two sides of the same coin: violence. The Aragonese artist finds both acts unjustifiable and refuses to take the side of either the Spanish or the French.

A comparison suggests itself between the face of the figure holding the axe and those paintings in which Goya represents scenes of cannibalism. The wild round eyes, the lost expression, the emaciated face and marked cheekbones, and the gaping mouth all lend this character a primitive air and make him look like a relative to some tribe of cannibals. Goya uses these facial features to refer to the irrationality of these acts, both those of the Spaniard killing a French soldier and those of the cannibals tearing apart their human victims. Furthermore, the posture adopted by the man with the axe bears a strong resemblance to that of the figure who is shown with his back to the viewer in The Forge, of which a preparatory drawing has also been conserved.

This print also suggests some clear parallels with a print by Hanns Ulrich Franckh (1590/1595, Kaufbeuren-1675, Augsburg) that shows a man wielding an axe and preparing to attack a second figure lying on the ground (1656, Hamburger Kunsthalle). In this case, the analogies are not limited to the subject matter but also extend to the wild, hate-filled expression on the face of the figure wielding the axe.

The etching plate is conserved in the National Chalcography Museum (cat. 254)