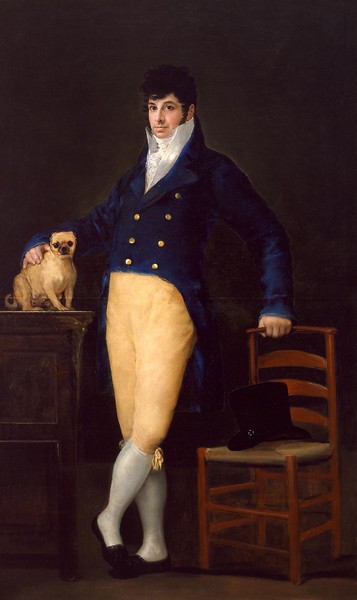 This work came from the old collection of Manuel García de la Prada, in Madrid, and subsequently formed part of the Ruiz y Prado collection in Madrid and then that of Mr Pacully, in Paris, being put up for auction in this same city in 1903. After changing hands several more times, it was finally acquired by the Des Moines Art Center in 1953.

Manuel García de la Prada (1776-1839) was a knight of the Order of Charles III, Chief Magistrate of Madrid and Commissioner of the Royal Armies. He was a close friend of Goya and possessed five of the artist's paintings: The Inquisition Tribunal, A Procession of Flagellants, The Madhouse, The Bullfight and The Burial of the Sardine, which after his death went to form the collection of the Academy of San Fernando, of which he had been named academician in 1812.

Goya's full-length portrait of Manuel García depicts him standing turned towards the viewer and with a certain dandyish look about him. His legs are crossed and his left hand rests on a chair, whilst with his right hand he strokes a dog on top of a table. His clothes are of the French Empire style: white lace shirt with high collar, blue frock coat with gold buttons, yellow trousers and white stockings. He has a full head of dark hair, complete with sideburns in keeping with the fashion of the period. The dark background helps bring the figure forwards and the bright colours of his clothing grab the viewer's attention.

Gudiol points out that this work belongs to a series of portraits painted at the beginning of the 19th century, all of which are far more academic than those painted in the decade of the 1780s.