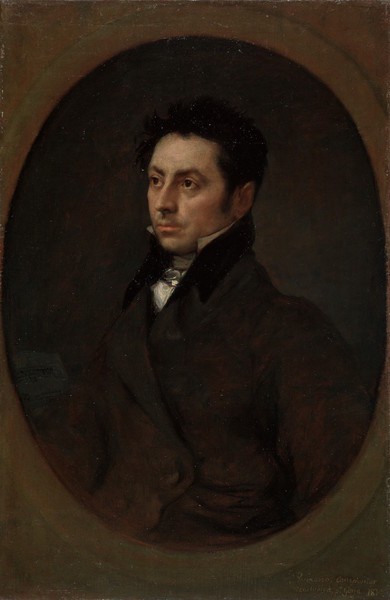 This portrait was probably painted by Goya to commemorate the subject being named director of the La Cruz theatre.

It was bequeathed by Francesc Cambó in 1949 and entered the museum's collection in 1951.

Manuel Quijano was a composer. In 1814 he was appointed director of the La cruz theatre, Madrid.

This half-length portrait of him is inserted inside an oval, imitating a wooden frame. Quijano is shown wearing a buttoned brown jacket with black collar, underneath which a white shirt is just visible. His body is turned slightly to the left, whilst his head, seen in half profile, is raised, looking towards some elevated point in a proud gesture. His face, dominated by its sharp features, wears a serious, almost annoyed expression. The sitter's posture suggests that he was an ambitious, strong-willed man, characteristics which earned him the post of director, which he held at the time of the portrait. Behind him, to his right, we see the only allusion to his profession: a musical score. The rest of the background is neutral, and of a greyish colour.