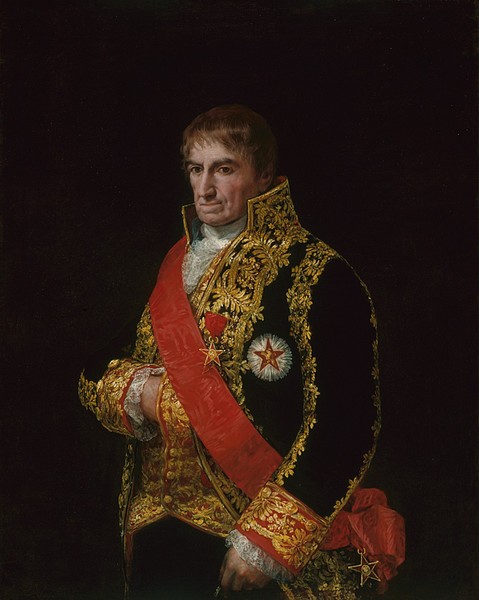 This painting has belonged to a number of different collections: Isidoro Urzaiz, Madrid (1887); Durand Ruel, Paris; Knoedler and Co., London and New York; and that of Charles Deering, Chicago. It was stored in the Art Institute of Chicago in 1922. It was inherited by several different heirs until Mr and Mrs Charles Deering McCormick finally donated it to the Art Institute of Chicago in 1970.

Manuel Romero was named Minister of Justice and then Minister of the Interior in Joseph Bonaparte's government. Apart from this, very few biographical details are known about him. Romero's ultimate fate was almost certainly that of exile.

According to Manuela Mena, this portrait could date from between 1810 and 1812, when Romero was Minister of Justice.

Here, the figure of Manuel Romero stands before a completely black background, wearing the uniform of Joseph Bonaparte's government. The sash and cross of the Royal Order of Spain stand out amongst the medals he wears. Every detail of his outfit is meticulously painted, using brushstrokes that, according to Manuela Mena, overlap to build up a thick layer of paint.

The subject's head, perhaps a little too small compared to the rest of his body, appears to have been slotted into the neck of the suit.

His face, depicted with marked realism, describes the many wrinkles acquired over the years, the sitter being between fifty-five and sixty years old at the time this portrait was made. His eyes look out at the viewer with a certain scepticism, coldness and timidity.