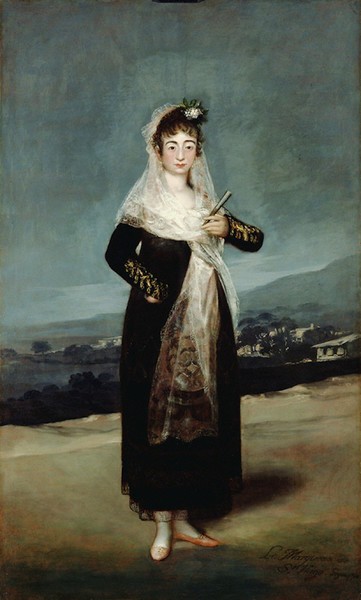 This work came from the collection of the Duke of Tamames, Madrid.

She appears here outdoors, in a natural landscape in which we can see hills and some houses in the distance. She is wearing a black, long-sleeved dress. Her head is covered with a white mantilla leaving part of her hair, adorned with some flowers, uncovered. She is also wearing silk stockings and golden shoes. Her right hand rests upon her waist, whilst in the left she holds a fan. The portrait's light source, coming from the left, falls on the lady's torso and lights up her face and the long mantilla. Her somewhat plain face appears slightly absent and tired.

As Gudiol points out, this portrait belongs to a genre in which we can see a certain deformation, not of the figure itself, but rather of the technique used, with preference given to certain effects and details whilst others are downplayed.