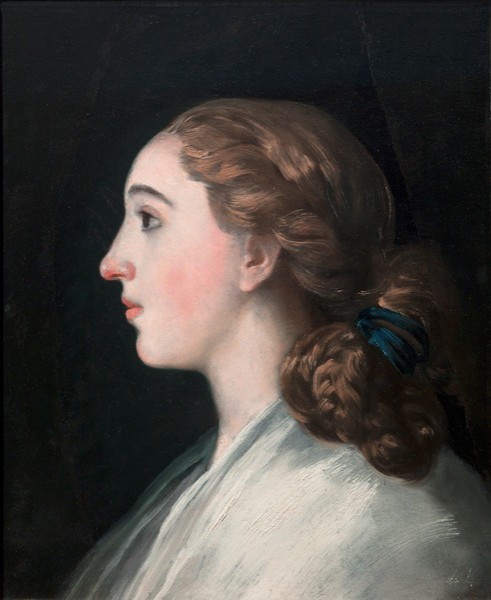 This work came from Boadilla del Monte (Madrid) and belonged to the sitter's descendants, the Count and Countess of Chinchón. It was later inherited by the Duke and Duchess of Sueca, and then later by the Marquis of Acapulco and the Marchioness of Caicedo. It was auctioned at Sotheby's in Madrid on 27 February 1985, entering a private collection in Madrid and from there going to the Bankinter collection (Madrid). It was acquired by the Prado Museum in 1995 as payment for a tax debt.

María Teresa de Vallabriga y Rozas, Español y Drumond de Melfort (1759-1820) was born in Zaragoza but, following the death of her parents, moved to Madrid, where at the age of 17 she entered into morganatic wedlock with the Infante Don Luis de Bourbon (1727-1785), the brother of Charles III and one of the most important patrons for Goya's career. From this marriage were born María Teresa de Bourbon y Vallabriga, the future Countess of Chinchón, Luis María, who would later become cardinal-archbishop of Toledo, and María Luisa de Bourbon y Vallabriga. Upon her husband's death, she returned to her native Zaragoza, where she lived in a Renaissance palace known as Casa Zaporta, and renamed the Casa de la Infanta in her honour.

As with the portrait of the sitter's husband, with which this painting forms a pair, this work was carried out by Goya in the summer of 1783, during the first of the trips that the artist made to Arenas de San Pedro (Ávila), the family's habitual place of residence. Both works were preparatory studies for the large canvas of The Family of the Infante Don Luis, today housed in the Magnani-Rocca Foundation (Parma, Italy).

It is a rather restrained bust portrait, in which María Teresa appears before a black background and in profile, as on an antique coins or medallion or in a noble portrait from the Renaissance period. Her long plaited hair is gathered up into a low-hanging bun and tied with a ribbon of dark blue silk. Her serene face, with its rosy cheeks, radiates youth and health. The presence of the white peignoir reveals that this is a study for the previously mentioned group portrait, in which the infanta is being attended by her hairdresser.

The quick, loose brushstrokes make it entirely feasible that Goya completed this work in a very short amount of time, just as the inscription claims.

More portraits by Goya of the infanta exist, including those at the New Pinakothek, Munich, and the Uffizi Gallery, Florence.

The paint layer had been damaged in the area of the face, where numerous scratches are visible. The work was possibly restored some time in the 19th century.

It was restored at the Prado Museum in 1996.