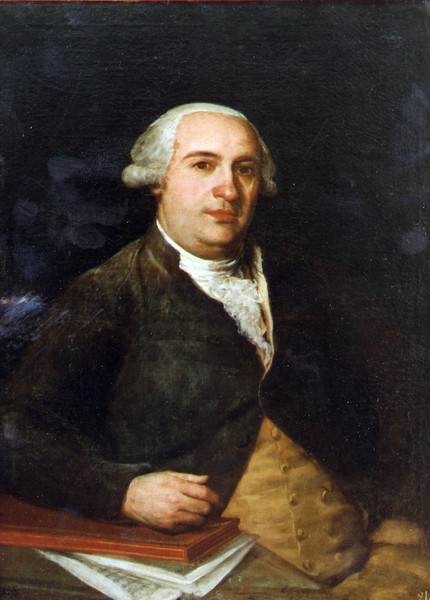 Fo. Goya (written on the papers on the table).

Donated by Mariano Ferrer to the San Carlos Royal Academy of Fine Arts in Valencia in 1809.

Mariano Ferrer was Secretary of the San Carlos Royal Academy in Valencia from 2 May 1785. Following his retirement in 1809 he was named an Honorary Academician.

In a letter Goya sent to his friend Martín Zapater in 1783 the artist refers to him as follows:

"In Valencia be sure to make the acquaintance of a Friend of mine who you will like a great deal, he is a fine fellow, and I have spoken of you at such length that he is most eager to meet you: his name is Don Mariano Ferrer. All of Valencia knows him and his love of the Arts and sciences, and you shall see his portrait which I painted when he was here."

The subject is seated, leaning his right arm on a table upon which there is a red folder full of papers bearing Goya's signature.

He is dressed in a dark green frock coat, yellow waistcoat and shirt with white frills. He also wears a wig.

As in the majority of Goya's portraits, the dark frock coat blends into the dark background, emphasizing the sitter's face.

The figure is characterized by his large head and affable expression. He seems calm and relaxed before the painter.

There is a copy or replica of this painting which belongs to a private collection and carries the inscription "D.n Mariano Ferrer P.r Goya 1786".