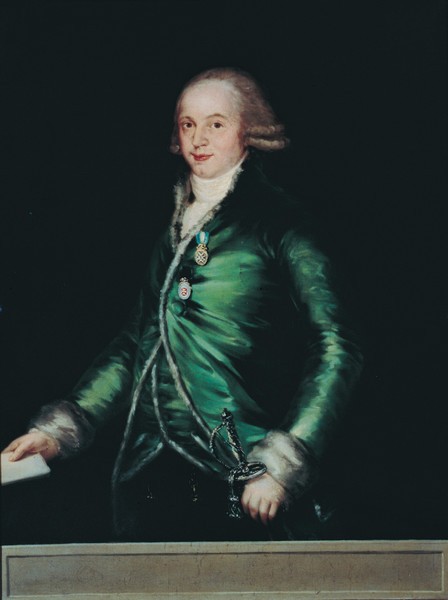 The Royal Academy of History, in gratitude for the support that Urquijo had provided them in his ministerial role, agreed during their meeting of the 15th August 1798 to commission this portrait of their benefactor, to be hung in the board room.

Mariano Luis de Urquijo y Musa (Bilbao, 1768-Paris, 1817) was named a senior official of the State Secretariat and, between 1798 and 1800, held the post of First Secretary of State (Prime Minister) of Charles IV. From a formal point of view, most writers have recognised Goya's authorship in this painting, despite the fact that in the archive of the Royal Academy of History there is a receipt dated 1800 for the realization of a portrait of Urquijo by the painter Francisco Agustín. The cause of this contradiction has still not been clarified. The half-length portrait shows the subject in front of a dark background.

He is wearing a green leather dress coat. His left hand rests on his sabre whilst his outstretched right hand holds a piece of paper. Hanging from his chest are the crosses of the Order of Malta and the Order of Charles III, this latter having been awarded to him in 1798. His smiling expression is heightened by the bright light falling on his face. The quick brushstrokes depict hardly any element in great detail, with the exceptions of the medals and the hilt of the sabre.