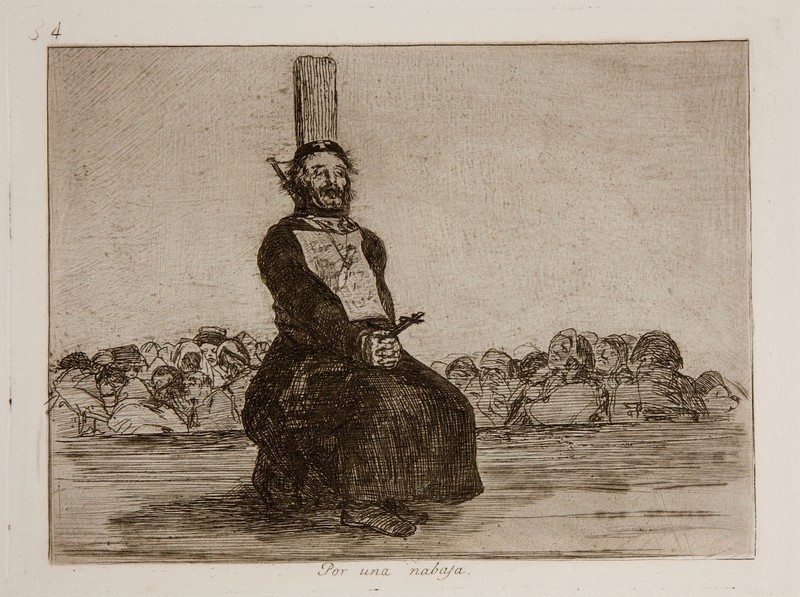 From 19 October 1809, Joseph Bonaparte (Corte, 1768 - Florence, 1844) adopted the garrotte as the main method of execution in Spain. Generally, this practice was used to make an example of someone, serving to maintain order and warn the population of the possible consequences of any subversive act. The newspaper Diario de Madrid references more than 40 using the garrotte between 1810 and 1812.

In December 1808 it was decided that all inhabitants of Madrid who were found to be in possession of a weapon would be arrested and condemned to death. Those condemned for carrying a weapon were forced to wear that weapon around their neck, as well as a text explaining the precise circumstances in which they had been arrested.

This is exactly what Goya depicts in this print: the moment in which a man who has been discovered in possession of a knife is executed by garrotte. On his chest he bears the knife hanging from a cord and, below that, a text that recounts the circumstances leading to his arrest. His hands are clasped around a crucifix. The scene takes place in a public place before a crowd attending the execution. In contrast to the events shown in print no. 29, He deserved it (Lo merecia), this crowd expresses distress and distaste, perhaps in solidarity with the death of a fellow Spaniard.

Goya has painstakingly depicted the face of the executed man, who is open-mouthed, his eyes staring into the distance. His hair stands on end, revealing the pain he has suffered before his death. It is a hard, realistic vision of the death penalty that leaves the viewer in no doubt as to the repulsion and disapproval that the artist feels towards this form of punishment, while the brief title On account of a knife is employed to suggest its disproportionate nature.

Goya also deals with this theme in The garrotted man (El agarrotado) and takes it up again in other prints in this series such as the following one, no. 35, One can't tell why (No se puede saber por qué) which depicts a mass execution.