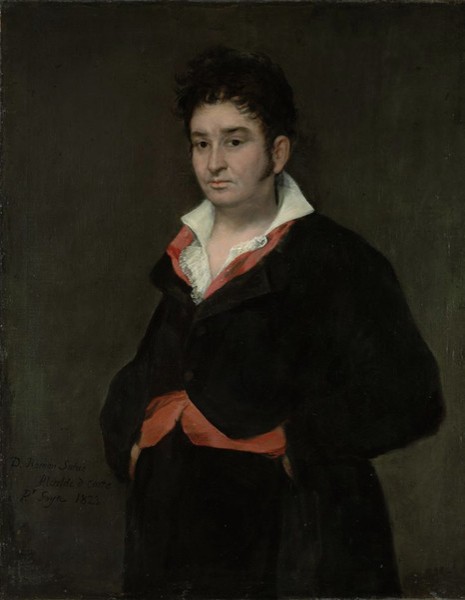 Goya made this portrait in Madrid.

It belonged to the collection of the Marquis of Heredia, in Madrid. It then entered the collection of Benito Garriga, in the same city, who put it up for auction in 1890 at Paris' Hôtel Droûot auction house, where it was sold for 1,500 francs (lot number 3). It was sold again, at the same auction house, in 1902 (lot number 21). On this occasion it was purchased for 9,510 francs by Dr. Joachim Carvalho, who kept it at his property of Château de Villandry, in the Indre-et-Loire region of France. It was acquired by the Rijksmuseum, Amsterdam, in 1922.

Ramón Satué was the nephew of Don José Duaso y Latre, whom Goya also painted to thank him for secretly sheltering the artist during the anti-liberal reprisals. Satué was a judge in the supreme court, as the painting's inscription indicates, but his term in office ended in 1820. This discrepancy in dates has led to some differences of opinion with regards the date when the painting was executed. Some writers believe that the last digit of the date in the inscription could have been manipulated, possibly changing a 0 for the now visible 3. These same writers argue that there are clear similarities between this portrait and that of Tiburcio Pérez Cuervo, made in 1820. However, the number does not appear to have been modified, and neither does the rest of the text. Goya probably just wanted to record the position that Satué had previously held.

Although the Count of La Viñaza suggested that Goya must have painted this portrait when in hiding at Satué's uncle's house, thanks to Sánchez Cantón we know that the artist was in Duaso's house between January and May of 1824, making such an idea impossible.

The subject is shown standing, in half profile, wearing a black housecoat, red waistcoat and a white shirt open at the collar, revealing the topmost part of his chest. His hair is dishevelled. He has his hands in his trouser pockets, in a self-confident, manly gesture. Goya has concentrated all of the work's expressiveness in the face, which looks intently, and almost challengingly, out at the viewer. The face, which has been far more deliberately and carefully defined, contrasts with the loose way in which the body has been rendered. The greyish background is completely flat. The very limited colour palette is only brightened by the red of the waistcoat which is peeking out from underneath the buttoned-up jacket.