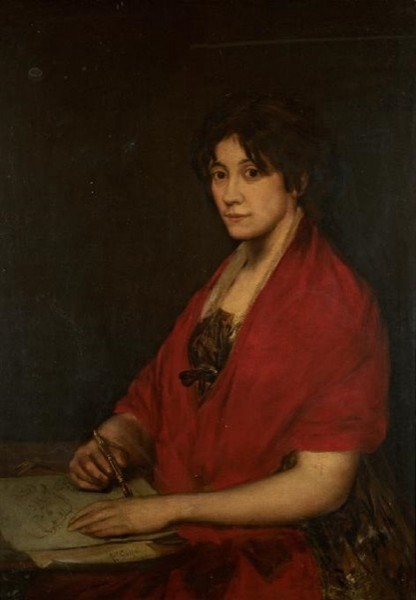 Pr. Goya ("By Goya", on one of the pieces of paper; it is not known whether or not the signature is genuine).

This work was in the Paris collections of Chéramy and Simon Oppenheimer.

There is no conclusive proof of the identity of the portrait's subject, although she was traditionally known as Lola Jiménez. Sánchez Cantón, after Beroqui, proposed that it could be the wife of the sculptor José Folch Cardona, whose portrait was exhibited at the Academy of San Fernando in 1808. The woman is shown seated, in half-profile, drawing on some pieces of paper on a table. She is wearing a short-sleeved outfit, from the top of which a white shirt protrudes. She is wearing her hair up and looking straight out at the viewer. Behind her is a neutral background, as in the majority of Goya's portraits.