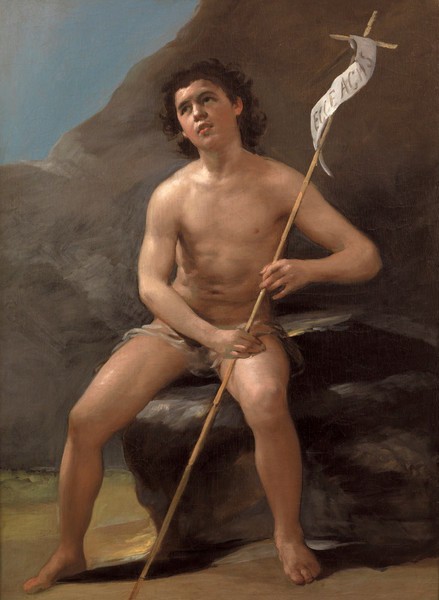 When Goya's wife Josefa Bayeu died in 1812, her possessions were divided up between Goya and their son during the period from 1812 to 1814. The paintings to be inherited by their son were marked with an "X" for Xavier, followed by the inventory number. This painting must have been sold by Javier following his father's death. It later belonged to the Pereire collection. On 30 January 1868, it was sold for 150 francs at the Hotel Drouot in Paris to the merchant Etienne Arago. The work then disappears for a while, and does not feature in the details of any sale made by Arago: it is possible that it was sold in a private transaction.

It reappeared on the English market, in the possession of the antiquarian Jean-Luc Baroni. It was entrusted to the Prado Museum following its acquisition in 2003.

From its measurements we can assume that Goya created this painting as a devotional work for a private client or small oratory, although later it remained in his possession.

Saint John is depicted seated on a boulder, holding his long cane cross to which a small banner is attached with the standard inscription of the saint's declaration ECCE AGNUS [DEI] ("Behold the Lamb of God"). Manuela Mena has commented that the closest references for the composition employed by Goya are found in the work of Guido Reni.

Thanks to the good state of conservation of this work, we can appreciate Goya's technique to the full. Here Goya has added green touches to the flesh tones, as he did in the paintings for the Santa Cueva (Holy Cave) in Cádiz, where the gloom fuses these tones with the light of the surroundings, Perhaps for this reason we can suppose that the location for this Saint John was a poorly lit room, oratory, or chapel.

The technique corresponds to this advanced phase in Goya's painting career. It was probably produced between 1808 and 1812 or a little earlier, judging from comparisons with other pieces by the artist documented during the period of the Spanish War of Independence. In any case, it was certainly created before the inventory was made on the death of Josefa Bayeu.

The relatively recent appearance of this work provides a new vision of Goya, and adds a new piece to the private devotional oeuvre he produced, which was never given due consideration in the past since it was not believed to be an important part of Goya's oeuvre.