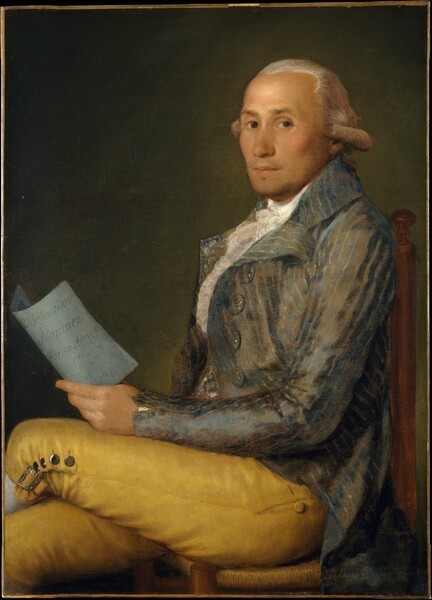 Goya painted this work for its subject. At a later date the painting was acquired by the Salzedo Collection in Madrid and subsequently to the Trotti Gallery in Paris before being sold to the Metropolitan Museum of Art in New York in 1905.

Sebastián Martínez was an important enlightened thinker, merchant and art collector. A great friend of Goya's, he lived in Cádiz. The painter also spent some time there convalescing from his illness, at which time he painted this portrait.

The subject of the painting is depicted against a neutral background, sitting side-on in a chair with his head turned towards the viewer. His elegant, brightly coloured attire is striking in its originality, with a striped jacket painted in fine parallel brushstrokes. He is holding a letter in his left hand which bears his name and the author's signature.

The sitter's face is manly and lively, and striking in its realism, in contrast to other portraits in which the subject's face could lack definition. His penetrating, intelligent gaze denotes his great love of art.