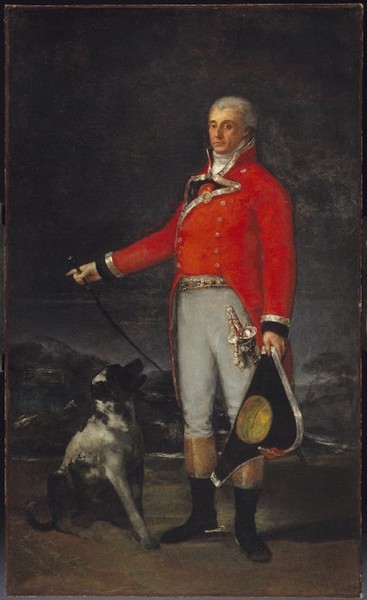 This work came from an unknown Spanish collection.

It was later in a private collection in Berlin.

It was sold at the Hôtel Drouot auction house, in Paris. Later on it entered the Spiridon and F. Kleinberger collections, both in Paris, before coming to form part of the collection of the Brooklyn Museum.

Don Tadeo Bravo de Rivero (1754-1820) was a prestigious Peruvian lawyer who moved to Madrid and came into contact with members of Goya's circle and with the painter himself, with whom he always maintained a close friendship. On the side of Joseph Bonaparte, he became a governor of Madrid in 1809. In the same year he commissioned Goya to paint the work known as Allegory of the City of Madrid.

In this portrait, the subject appears dressed in uniform, with a red dress coat that features silver borders at the neck and on the sleeves, grey trousers and riding boots with spurs. In his left hand he holds a three-cornered hat and in the right hand a riding whip. At his feet there is a dog, which appears to be looking up at his master.

He is depicted outdoors, in a scene reminiscent of the work of Velázquez, a painter whom Goya greatly admired. Of particular interest is the subject's serious face, which is looking straight out at the viewer. Our attention is drawn to the differences between the loose, rapid brushstrokes used for the dog and those employed on the figure of the man, above all those on the dress coat, which are much more compact and well-defined.