This too (Tambien esto) 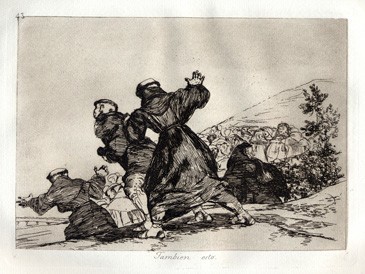 The title was handwritten on the print by Goya in the first and only series that is known to have been printed at the time the works were created, which the artist gave to his friend Agustín Ceán Bermúdez. Therefore, the title was etched into the plate at a later date and left unchanged as of the first edition of The Disasters of War after the printing of the series in the possession of Ceán Bermúdez. This edition was printed by the San Fernando Academy of Fine Arts in Madrid in 1863.

As in print no. 42, Everything is topsy-turvy (Todo va revuelto), Goya creates a scene showing the flight of clergymen who, following their absence from previous prints, now take on an important role in the series.

The image is very similar to no. 42, although the figures in this image are seen from behind. The monks are shown fleeing in the foreground, while in the background near a mountain there is a large group of people who, unflinching, assist in the expulsion.

Juan Carrete Parrondo believes that both this print and the previous one might allude to the decree establishing the suppression of religious orders issued by Joseph Bonaparte, which came into effect on 18 August 1809. Tomás Harris highlights the similarities between these two prints and the Emphatic Caprices (Caprichos enfáticos). Jesusa Vega links them to Goya's drawings from Album C, which show the expulsion of the religious orders.