Everything is topsy-turvy (Todo va revuelto) 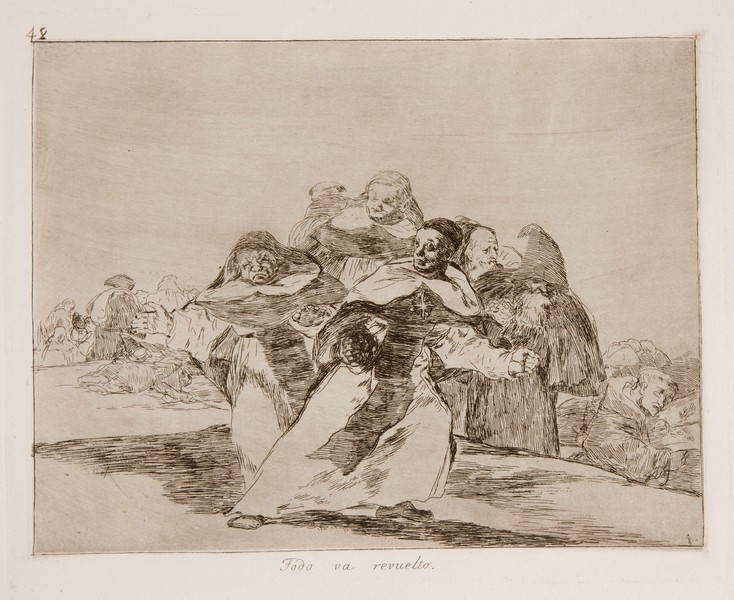 Franciscan and Dominican monks are shown fleeing from the monastery from which they have been expelled. The confused looks on their faces express their indecision as to the best route to take. Indeed, each of the figures in the foreground indicates a different route to the others.

Goya left a good proportion of the surface of the plate empty, and has described the faces of the figures in great detail: in the majority of cases they are almost caricatures, a fact that has been interpreted as a criticism of the Church.

During the Spanish War of Independence, the Church positioned itself on the side of the Spanish people, but the ecclesiastical hierarchy acted in a more self-interested way as it saw a significant threat to the privileges they enjoyed in the ideas that the French represented. In the case of clergymen that did not belong to the upper echelons of this hierarchy, their position as allies of the people was more sincere: some even cast aside their habits in order to take up arms and fight alongside the guerrillas. As could be expected, this behaviour brought about some reprisals, leading to events such as that depicted in the print Everything is topsy-turvy.

The war shook Spanish society to its core, leading priests and monks to take arms to defend themselves in a way not appropriate to their station. This might be the message contained in the title of this print, although it may also make reference to the fact that the war had breached the stable comfort of religious life.

There may be a veiled message referring to the end of the Inquisition in the lower right-hand corner of the print, as pointed out by Jesusa Vega. On that section of the plate, Goya has etched a monk holding an emblem bearing a sword and an olive branch, symbols representing the Inquisition.

Miguel Gamborino (1760-1828) also produced a print (National Chalcography, Antonio Correa collection, Madrid) in 1813 that portrays the consequences of the intervention of the clergy in the Spanish War of Independence. It shows a group of Franciscan monks being shot by a French platoon on 18 January 1812.

Everything is topsy-turvy continues in the line of the previous print in the series, no. 41, They escape through the flames and also references the theme of the two following prints: no. 43, This too (También esto) and no. 44, I saw it (Yo lo vi), which depict figures fleeing a scene for various reasons.

The plate is stored in the National Chalcography (cat. 293).