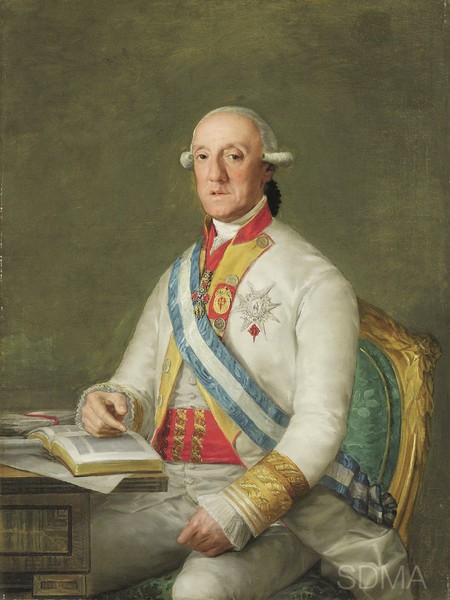 This portrait may have been commissioned to commemorate the sitter's election as Director of the Royal Academy of History.

It belonged to the sitter's family until 1938. It was acquired by Anne R. Putnam and Amy Putnam, who donated it to the museum where it is on show today.

Vicente María de la Vera y Ladrón de Guevara, Duke of La Roca and Marquis of Sofraga (1729-1813), was Captain General of the army and State Councillor, as well as academician of honour and merit of the Royal Academy of Fine Arts of San Fernando.

In 1794, Charles IV awarded him the honour of the Order of the Golden Fleece.

The nobleman appears here seated in a green chair embellished in gold, with his right hand resting on a table where we see a number of books open, symbols of his status as an ilustrado. He is dressed in the white suit of Captain General, on top of which the insignia and sash of the Order of Charles III stand out, along with the cross and scallop shell of the Order of Santiago, of which he was Knight Commander. Hanging from his neck is the badge of the Order of the Golden Fleece.

Painting the white suit allowed Goya to play with the colours in the details, such as the red of the sleeves, collar and sash, which stand out very prominently. The artist depicts the sitter as a man who is sure of himself, of strong character and pride and with a tired look in his eyes.

Gudiol points out that the line work in this portrait is as minimal as it is in almost all of Goya's work, although here the outlines are slightly more precise than in other works of similar characteristics and from the same period.