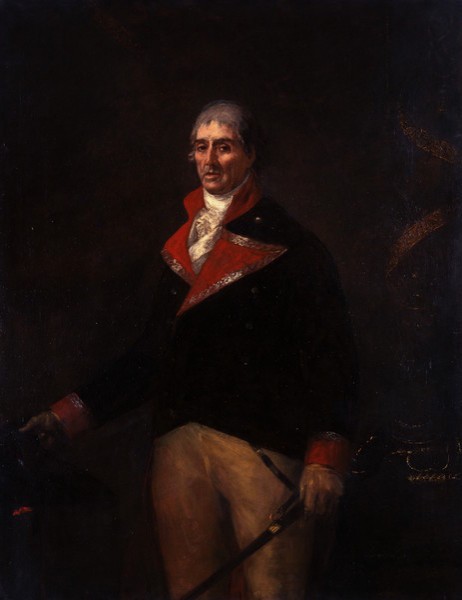 Here he is shown standing, in front of a neutral background, in military uniform featuring a large vibrant red collar with a gold border. Underneath his dress coat is a white shirt, which brings some luminosity to the composition. In his left hand he is holding a sabre, whilst in his right he holds a hat, resting on top of what appears to be a table, although it is difficult to be sure due to the poor condition of the painting.

On his head, which is somewhat out of proportion to the rest of his body, his hair is painted irregularly, and his face, which is turned directly towards the viewer, gives us a sensation of tiredness, particularly in the wrinkled brow, painted in great detail by Goya.

According to Gudiol, an X-ray of the work revealed that it is painted over the top of a portrait of Godoy, as Secretary of State. This older portrait was made between 1792 and 1794 by the Portuguese painter José Caetano de Pinho e Silva. In the top right-hand corner it is still possible to see a part of the drapery from the older painting.

There exists a study of a head for this portrait (in a private collection), but its attribution to Goya is questionable.