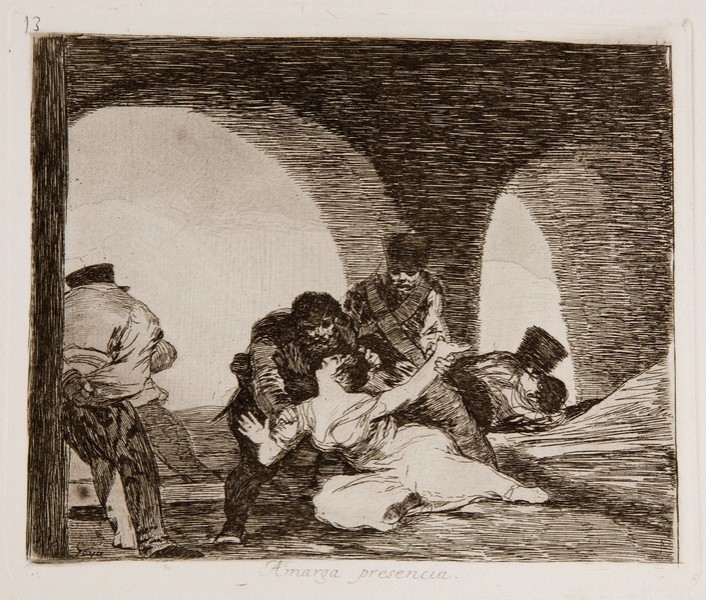 There exist two state proofs for this etching. The first features some drypoint on the sword belonging to the man reclining on the left-hand side and some retouching with burin below the woman's right breast. In the second proof the lavis work has been added.

In an interior space featuring two archways through which the light enters, a handcuffed man is leaning against a wall, his back to the viewer. He is about to bear witness to a brutal rape. Two soldiers have hold of a woman, perhaps the wife of the handcuffed man, by the arms. She is looking up at one of her attackers, pleading for mercy. At the same time, another soldier is raping a second woman in the background.

The place is which these actions are taking place bears some similarities to the space depicted by Goya in etching no. 11, Or these. This would be somewhere out of the way, where nobody is likely to come to the aid of the prisoners, somewhere that, far from sheltering them, becomes their prison.

Bitter presence is a heavy, particularly dark image. The light that is flooding in through the two archways falls mainly on the clothes of the woman in the foreground and on the shirt worn by the man who is being forced to witness the unfolding events. The soldiers either have their backs to us or their faces are either downturned or simply dimly lit, so that we cannot identify them, just as occurs in many other etchings in the series.

This etching can be related to those other prints in the Disasters of War series in which women play an important role, often as victims of different types of violence: no. 3, The women give courage, nº 7, What courage!, nº 9, They do not want to, nº 11, Or these, nº 19, There is no more time and no. 31, That's tough.

The etching plate is conserved in the National Chalcography Museum (cat. 264).

The copperplate for this etching used half of the plate from Landscape with Cliff, Buildings and Trees.