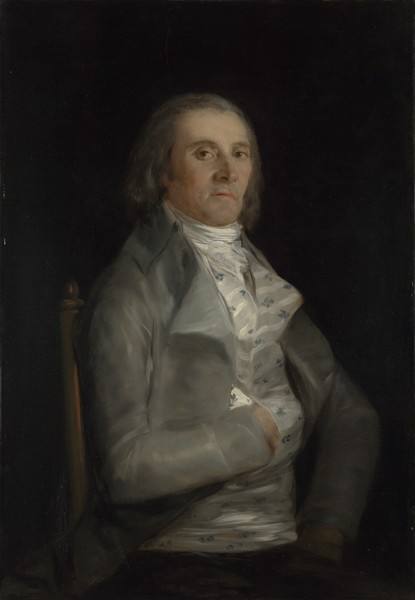 It was acquired by the granddaughter of one Dr. Peral of Seville by the Marquis of Vega-Inclán, probably at the end of the 19th century. From there it passed to the Gaston Linden Collection in Paris. In 1902 it was sold by Dannat to Sir George Donaldson, who lent it to the National Gallery in 1902, donating the painting to the same institution in 1904.

Andrés del Peral worked as a painter and gilder in the Spanish Royal Sites in 1774 and 1778. He was an important art collector, and according to some authors he may have been in possession of the best collection of paintings in Madrid in the 18th century. He sold his collection in 1808 to Charles IV of Spain. Today, many of these paintings can be found in Spain's Prado Museum.

He seems to have been a good friend of Goya's, who painted this half-length portrait of the collector. He is seated, with his right hand placed inside his jacket - a fact which would have meant that the price of the portrait was lower, since the artist did not have to paint both hands.

He is dressed in a silver grey frock coat, white waistcoat decorated with blue motifs and a scarf of the same colour. The figure stands out against the dark background, illuminated by a strong light focus which gives volume and importance to the sitter.

According to Juan J. Luna, the subject's eyes are striking in their hardness. His face is serious and his mouth is drooping slightly to the left, which may either be due to his expression or indeed some facial problem.