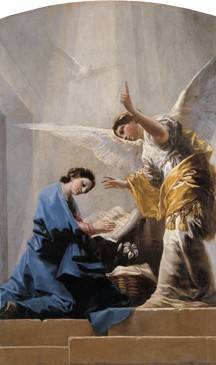 When the architect Ventura Rodríguez wrote a report warning of the imminent ruin of the baroque main altarpiece in the Chapel of the Capuchin friars of San Antonio del Prado in Madrid, the House of Medinaceli decided to commission a new altarpiece which would respond to the new classicist taste. The architect Sabatini was in charge of the masonry work of the altarpiece, while Goya's task was to create the altar painting. On 8 December of that year, the new chapel and the altarpiece were consecrated, and Goya's painting was unveiled in a solemn ceremony.

When the chapel was destroyed in 1890, the painting passed to the widowed wife of Medinaceli. It was subsequently inherited by her son, the Duke of Osuna, and later passed down the family to its current owner.

This is one of the most interesting paintings from the catalogue of religious works by Goya. The upper section of the canvas is curved to fit the altar, creating a sense of height, elevating the painting into the vault of the chapel. The chiaroscuro gives a great sense of space. The two figures in the scene are raised up on a base, forcing the viewer to look up at them. The low viewpoint contributes greatly to the monumentalism of the figures. Goya's talent for ceiling frescos is evident in this work, which has a notably Tiepolesque air.

Despite their colossal size, the figures' faces are very delicate, while their features have the sweet, porcelain aspect typical of classicist style. The Archangel Gabriel dominates the scene in all his splendour as he delivers the heavenly news to Mary, who kneels before him, humbly accepting her destiny. In contrast with the painstaking execution of the countenances, the folds of the clothing are simplified, giving a modern, almost primitive feel. The background of the composition, with its rich impastos, or the parallels between the wings of the archangel and the steps, are also techniques ahead of their time.

As if to show off his knowledge of the subject, Goya has substituted the traditional book held by Mary with a Megillah scroll, thereby alluding to the Hebrew nature of the Old Testament and the passage from Isaiah which prophesies the virgin birth of the Messiah. Mary's work basket also features in the composition, along with lilies, a symbol of purity. No doubt these elements were added to the definitive version at the request of the Duke, who had very traditional tastes.

The Holy Spirit is accompanied by rays of light which bathe figures from the heights of the composition, and it is in this respect that the painting differs most from the preparatory sketch preserved in the Museum of Fine Arts in Boston. The upper section of the sketch in which Goya had initially planned to represent the Lord sending the Holy Spirit has been eliminated, giving the work a more intimate, less supernatural air without losing the mysticism and religious feeling which the subject requires.