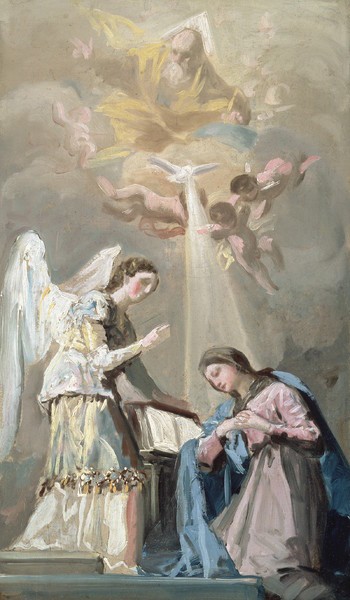 This is a preparatory sketch for the painting commissioned by the Duke of Medinaceli for the Chapel of the Capuchin friars of San Antonio del Prado, Madrid.

The work belonged to the collection of the Marquis of the House of Torres, and was acquired by a private owner in Barcelona followed by the London collection of Daniel Wildenstein before it was eventually entrusted to the institution where it is housed today.

This sketch or initial idea for a painting differs from the final work in many ways. However, it is very possible that this was the first of various preparatory sketches which were not preserved, and this would account for the substantial differences between the two canvases.

There are two main differences between the sketch and the definitive work: the position of the two figures has been reversed, and the celestial group which appears in the sketch has been eliminated. This group is presided over by God, surrounded by a host of putti who fly around the Holy Spirit, who casts a clearly defined ray of light on the Virgin Mary. The reversal of the positions of the figures changes the way that the viewer reads the painting. If we order the characters from left to right as if this were a book, in the sketch the viewer's attention is focused on the Virgin, while in the painting we are drawn to the hand of Gabriel, which points towards the heavens.

The brushwork is impasto, almost dry. The colour scheme contrasts Mary and the Archangel, as if to separate the divine and the human. The freshness of the execution of the sketch which narrates the Annunciation (Luke 1, 26-38) contrasts with the imperial classicism of the definitive version.

Its similarities with the Annunciation by Mengs (Royal Chapel of the Palacio de Oriente, Madrid) are clear. Goya used that neoclassical composition as a reference, repeating the positions of the characters. The Virgin Mary is pictured kneeling in a similar posture, although she is on the left as in the final version, while the Archangel Gabriel is pointing to the sky. Likewise, this Gabriel is also indicating the opening in the clouds where the figure of God appears surrounded by his celestial cortege and bathed in a warm light. The Holy Spirit in the form of a dove is also present, shining a ray of light onto the Virgin Mary.