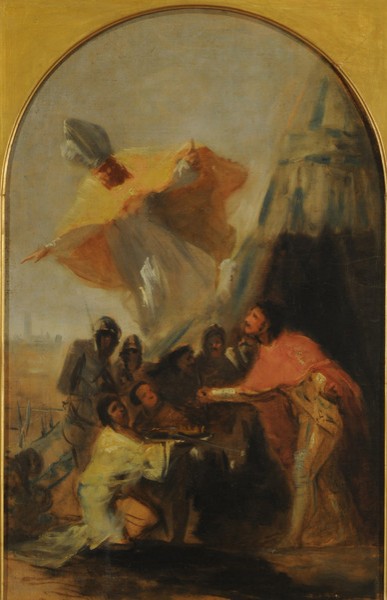 The Church of San Fernando de Torrero was built at the behest of Ramón Pignatelli for the spiritual wellbeing of the workers on the Imperial Canal of Aragón. In 1800 the church was finished, and the altars were decorated with three paintings commissioned to Goya with the subjects Apparition of Saint Isidore to Saint Ferdinand III, Saint Elizabeth Curing a Sick Woman, and Saint Hermenegild in Prison. Nevertheless, the building was not consecrated for two years due to administrative problems.

The three paintings were lost in 1808 with the arrival of French troops, as recorded in a report written by Tiburcio del Caso in 1813 and in an inventory from 1814.

The only remaining pieces of this project are the sketches which Goya gave to his close friend Martín Zapater, and the description which Jovellanos wrote in his diary on 7 April 1801 when he viewed the works before the consecration of the temple. Jovellanos, who was on his way to exile in Mallorca, said that the altar paintings were beautiful, "admirable not so much for their content as for the force of the chiaroscuro, the inimitable beauty of the colours and a certain magic of lights and hues which, it seems, no other brush could produce".

This sketch belonged to Martín Zapater, and was inherited by his grand-nephew Francisco Zapater y Gómez. It then belonged to Pablo Bosch who acquired it for his Madrid collection and subsequently sold it to Antonio Cánovas, also in Madrid. On 17 November 1910 it was auctioned by Porlitz at the Hotel Drouot in Paris, and was purchased for the sum of 2,150 francs by Georges Bernheim, who, in turn, sold it to Pedro Artal. Artál's son José in Buenos Aires inherited the painting and then sold it to the city's National Fine Arts Commission for 20,000 Argentinean pesos. The piece was entrusted to the Buenos Aires National Fine Art Museum.

The painting corresponding to this sketch was that of the main altar, dedicated to Saint Ferdinand, the church's patron saint, although Jovellanos identified it as representing King James I the Conqueror in sight of Valencia. Goya must have used the chronicle of Alfonso Núñez de Castro, King Charles II's chronicler, as a source for this painting. As in the case of the sketch, the top of the final canvas took the form of a semi-circular arch.

The scene shows Saint Isidore, the sainted bishop of Seville, appearing before Saint Ferdinand, instilling him with the strength to take the city. The Giralda Tower can be made out in the background behind the king, who is receiving the sceptre and crown.

According to Camón, it is the most confused of the three sketches due to the different possible interpretations of the subject and the contradictory nature of the forms making up its composition. It is characterized by a rushed technique, executed with vigorous, loose brushstrokes. Despite this, we can detect the monumentality and the development of the colour scheme to be used in the definitive piece