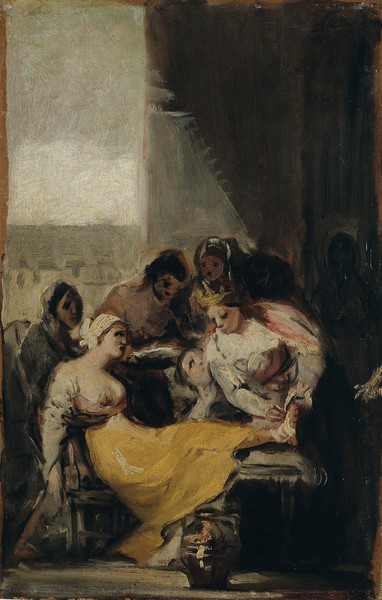 See Apparition of Saint Isidore to Saint Ferdinand III. This sketch belonged to Martín Zapater, and was inherited by his grand-nephew Francisco Zapater y Gómez. In 1900 it entered the collection of Mr Clemente Velasco, who sold it to Mr José Lázaro some time between 1928 and 1936. The work was entrusted to the museum bearing his name in 1951.

The painting corresponding to this sketch was located on the Evangelical side of the church. The subject has often been confused with Saint Elizabeth curing the lepers, but here Goya is illustrating a different, albeit similar chapter in the saint's life, most probably inspired by the biography narrated by Father Juan Carrillo. The Aragonese saint, daughter of Peter the Great, cured a woman whose foot was full of wounds which doctors could not heal. When the queen attended her, the foot was miraculously healed, the sick woman finding comfort in God.

The sketch is not a polished work: the brushstrokes are energetic, the faces are hardly defined at all, and the colour palette is limited to ochres with a few touches of red and yellow. The scene is lit up by the window on the left-hand side, illuminating the most important figures. The saint and the sick woman are denoted by their respective crown and headscarf. Although the artist takes care to signal the fact that Saint Elizabeth is a queen, he places the emphasis on her charitable vocation. It seems that Goya gave more importance to the action than to the order of the figures.

The sick woman has a bare chest, as if she did not have the strength to dress herself. Doubtless Goya would have modified this detail in the definitive work, since it was destined for a holy temple. The artist had to retouch the painting in 1801 before the building was consecrated, as stipulated by the church authority and recorded in a document dated 24 November 1801 written by Larripa and addressed to the Secretary of State, Pedro Cevallos.